March 20, 2019 | by the Office of Marketing and Communications 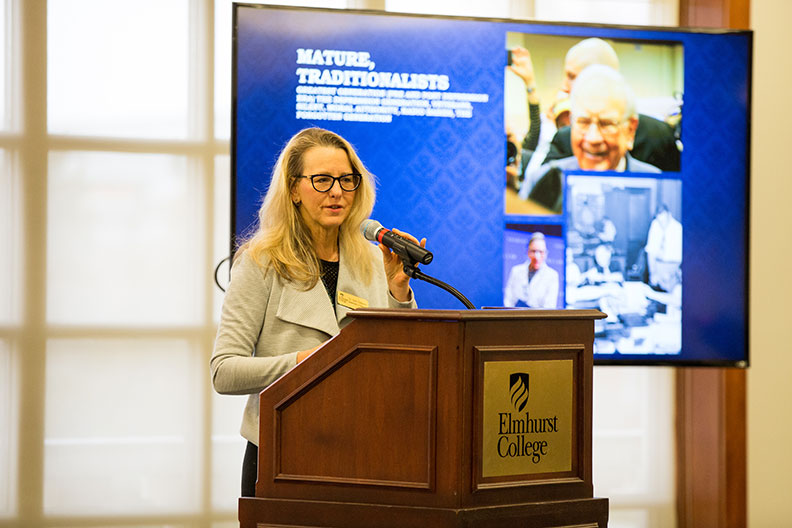 Soni Simpson, associate professor of business administration at Elmhurst College, presents during the ABCs of Gens Y and Z symposium on March 1.

The most recent generations of women and men to enter the workforce—members of Generation Y (aka Millennials) and Generation Z—have expectations about careers and life that vary widely from the Baby Boomers and Gen Xers who currently hold more of the leadership roles. Generations Y and Z also are different from each other and don’t appreciate the labels they’ve been given.

But the experiences that shaped the two younger generations, especially their early exposure to digital technology, distinguish them so much that employers and marketers need to better engage them where they are—or risk losing their contributions as employees, colleagues and consumers.

Those were some of the messages that came out of The ABCs of Gens Y and Z: Engaging and Employing Our Future Leaders, a symposium hosted on March 1 by Elmhurst College. Nearly 200 people from the local business community and the College attended the symposium, whose goal was to help both current and future workers and leaders appreciate not only their differences but also the opportunities to work together across generations.

Soni Simpson, an associate professor of business administration at the College, led off the program by defining the four generations currently in the workforce, and some of the forces that shaped them.

In the workplace, a supportive culture and a healthy work-life balance are priorities for both Generations Y and Z—in some ways more than money, said Jen Ullrich, system director of talent acquisition and development at Edward-Elmhurst Health.

Both generations thrive in environments that offer remote work options and flexible hours. Among Millennials, job-hopping is common, so employers should be prepared to help them transfer their skills to other departments within their organization. Generation Z employees value fairness and expect a corporate culture that prioritizes equality, diversity and inclusivity.

Millennials saw the rise of the widespread use of the internet, social media and smartphones, making them pioneers of the digital age—quick to learn the tools of technology and apply digital solutions to everyday work problems, Ullrich said. Because Generation Z was born into the technology, they’re able to work with it instinctively.

Digital technology also is key to marketing to Generations Y and Z as consumers, said Stephanie Pursley, associate media director of the Lipman Hearne marketing and communications firm. Both strongly associate the internet with how they communicate and express themselves, get their news and entertainment, and conduct research and make purchases.

But regardless of the generation, people have a basic need for connection and belonging, and for finding fulfillment in their work. “This need to belong crosses cultures, race and other identifiers, and is much greater than a generational thing,” Ullrich said.

During a panel discussion at the end of the symposium, the panelists—all members of Generations Y or Z—agreed that society could be more successful if the different generations could be more empathetic and focus on what they have in common.

“Every single one of us was in that ‘punk kid’ generation once, where the older generation looked down on them,” said Joe Palandri ’19, an intern at Larry Roesch Chrysler Jeep Dodge Ram. “If both the older and younger generations could think about it more like a two-way street, we could go a long way toward understanding each other better.”