May 1, 2019 | by the Office of Marketing and Communications 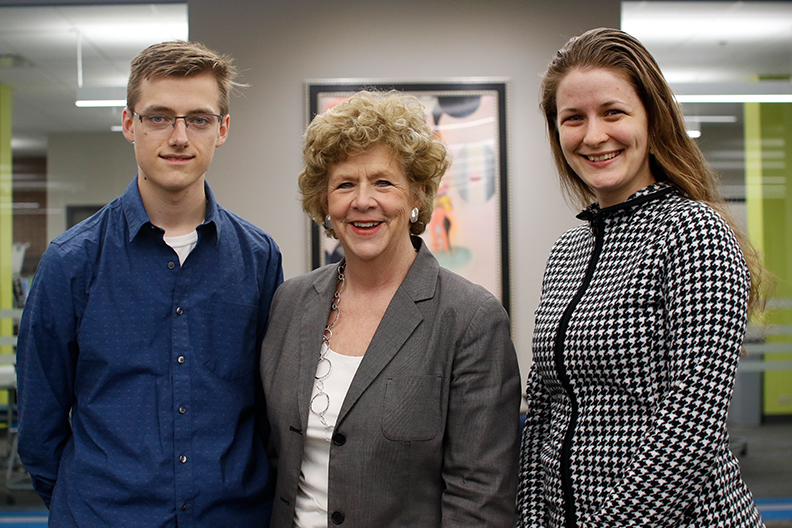 Kevin Prehn, of Algonquin, Ill., and Karenina Thomas, from Brasilia, Brazil, applied earlier this year for the program, which enables graduating college seniors to participate in a cultural exchange initiative. Finalists receive grants to pursue study or research projects, or to participate in the English Teaching Assistant Program in 140 host countries outside the U.S.

Though neither student was named a finalist this year, “to move to the level of semi-finalist within an extremely competitive pool of highly talented undergraduates is not to be underestimated, and I am so proud of Kevin and Karenina,” said Mary Kay Mulvaney, an English professor who is director of the Honors Program and the College’s Fulbright Program advisor. In the four years that Mulvaney has served as Fulbright advisor, with the help of Professor Emeritus Earl Thompson, five Elmhurst students have been named semi-finalists and two of them went on to become finalists.

A double major in computer science and German, Prehn applied in the research category. He proposed creating a technology-based solution for seamless translations between English and a second language.

“It would have been pretty fun to make software to promote intercultural understanding,” said Prehn, adding that he plans one day to pursue the project he initiated during the Fulbright process. “I want to create a predictive keyboard where you type what you want to say, and technology will translate that grammatically and contextually.”

Thomas, a special education major, wasn’t looking for “the average Fulbright experience,” as she already is a dual citizen of Brazil and the United States as a result of her parents’ missionary work. She taught English to Brazilian children prior to starting college, and aspires to improve the educational experience for elementary students with special needs.

In her Fulbright application, Thomas proposed working as an assistant teacher in her mother’s country, Norway, where she’d seen a cousin with Down Syndrome be effectively integrated into the classroom. Even though Norway is considered one of the more competitive countries to give a Fulbright award, Thomas is glad she applied.

“As a senior, it was helpful to state what my goals and ambitions are,” she said. “I was reminded that time doesn’t stand still, so the time to prepare for the direction I want to go in is now.”