March 22, 2018 | by the Office of Marketing and Communications 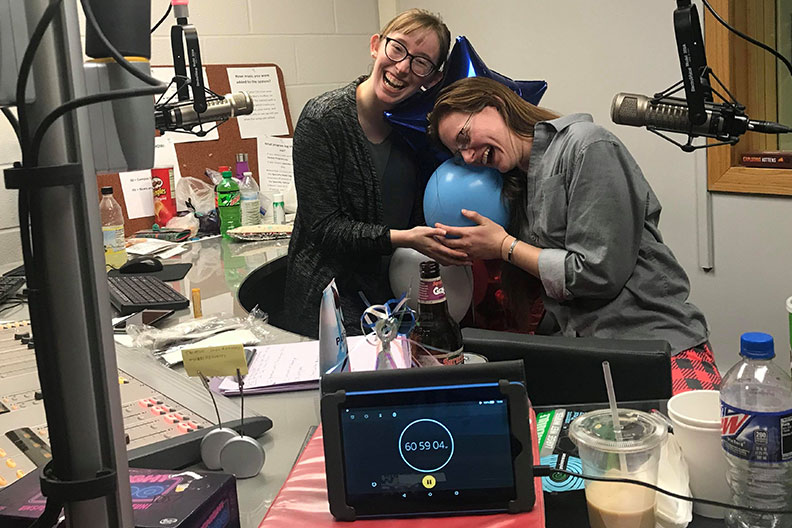 As Elmhurst College seniors getting ready to graduate in May, Jennifer Anthony and Emma Kaminski wanted to do something big to commemorate their time on campus and as deejays at WRSE, the College radio station.

And so, armed with a five-page list of discussion topics, several board games, and many friends who came to bear witness—and endless cups of coffee and bottles of Mountain Dew—Anthony and Kaminski stepped into the WRSE sound booth last weekend to try and set the record for World’s Longest Marathon Radio Talk Show as a Team.

Anthony, a double major in French and communication sciences and disorders; and Kaminski, a music business major, officially started their show on Saturday, March 17, at 10:08 a.m.

The ground rules were simple, yet grueling:

They didn’t take their first 5-minute break for more than six hours, at 4:30 p.m. Saturday afternoon; and took their second around 1:00 a.m. Sunday.

They took a few short power naps, but the only one of any length was for an hour, and they had to be on the air for 12 hours first to build up that time. The lack of sleep was especially hard for Anthony, who says she’s “an 8 to 10 hours of sleep per night person.”

“The hardest part was from about 2 a.m. to 6 a.m. on Sunday,” she said. “That’s when I was thinking, ‘How am I going to make it through?’ I’d never even pulled an all-nighter before, so I was trying to move around and was slapping myself a little to try to stay awake. I probably wasn’t very interesting to listen to, but I made it.”

It helped that friends continually brought them coffee, and a local restaurant, the Red Arrow Tap Room, provided all of the lunches and dinners.

They had unofficially broken the world record.

“I feel like, if I made it through this I can do anything,” Anthony said, “but I also feel like I would never do this again.”

Now Guinness must review the evidence that the students submitted about their effort (video, witness accounts, etc.). It could be three months before Kaminski and Anthony learn whether they are the new official title holders.

In the meantime, they’ll finish out their senior year on a high note.

“A lot of people told us we were crazy, and couldn’t believe we were trying to stay up for so long,” Anthony said. “But we also had a lot of support from our friends, family and the College community, so it was a good connection for us, to get that kind of support.”