February 22, 2021 | by the Office of Marketing and Communications 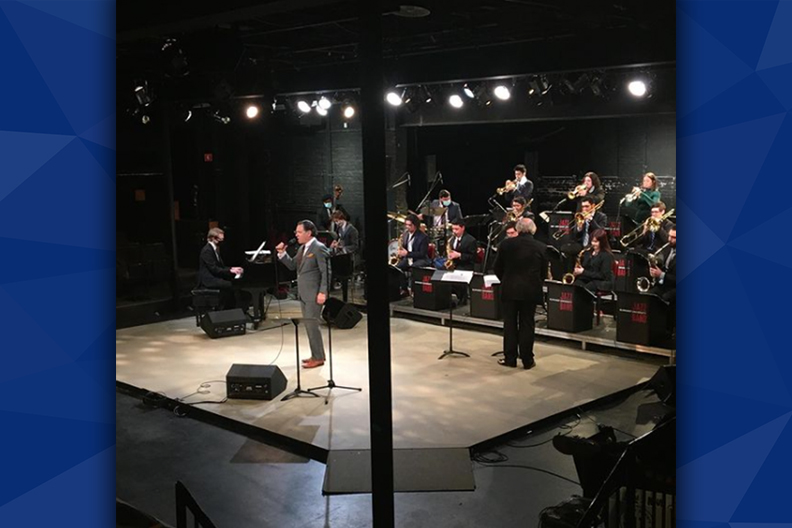 Photo from the recording of Kurt Elling and the Elmhurst University Jazz Band for the 54th annual Jazz Festival, Feb. 26-28.

Elmhurst has been hosting its nationally renowned collegiate jazz festival annually for more than half a century. Doug Beach, the festival’s longtime director, wasn’t about to let that streak end—even if it meant having to work around a pandemic.

So this year, thanks to some extraordinary adjustments from Beach and the festival’s staff and guest artists, the good vibes will go virtual. Beginning Friday, Feb. 26 and running through Sunday, Feb. 28, the 54th Annual Elmhurst University Jazz Festival will stream recorded live performances by guest artists Ryan Truesdell’s Gil Evans Project, Matt Wilson’s Arts & Crafts, and Grammy-winning vocalist Kurt Elling, along with some of the nation’s top college and university jazz ensembles. The college bands will receive critiques from a distinguished panel of adjudicators: drummer and composer Dennis Mackrel, saxophonist Donny McCaslin, and trumpeter Terell Stafford. And this year, the audience will be able to listen in not only to that feedback, but also to post-concert conversations with Truesdell and Wilson.

“We easily could have thrown in the towel and tried again next year,” Beach said of the hurdles posed by the pandemic. “But we’ve done 53 of these festivals now, and it would be a shame not to do 54. We thought, ‘What if we did it online?’”

The Jazz Festival is a mammoth undertaking even in ordinary years. This year’s virtual format eliminated some logistical hassles: no tour buses to find parking spots for, no acts to hustle on and off stage. But the new format also brought new challenges. Beach began recording some guest performances back in December, at William Patterson University in New Jersey, a process that involved mustering a small army of sound engineers and camera operators. (Think Super Bowl-style coverage, applied to a jazz performance.) Those live sets, like all of the Jazz Festival’s performances, were staged and recorded exclusively for the Festival. The spotlight performance by Elling, his debut at the Festival, was recorded Sunday, Feb. 21, in the University’s Mill Theatre, and pairs the singer with the Elmhurst University Jazz Band. (In another change, this year’s Festival will be the first since the institution changed its name to Elmhurst University.)

Like performers everywhere over the past 11 months, Beach’s student musicians have had to deal with the loss of live gigs. But in turning to livestreamed performances, musicians have discovered one potential upside: Virtual formats make audiences, well, virtually limitless. Whereas 900 people might squeeze into Hammerschmidt Memorial Chapel and 200 into the Mill Theatre, the number enjoying the Jazz Festival online this year promises to be much higher.

Bands from 11 colleges and universities from across the nation will be represented, including Festival favorites like the University of Kentucky, the University of North Texas and Western Michigan University. And even if those bands won’t be able to bask in the enthusiastic acclamation they usually receive, Beach says they will still be inspired to play. “We may not be able to see our audiences this year,” he said, “but we’ll know they’re out there.”