Home » News » Why Change Comes So Hard to the American University

Why Change Comes So Hard to the American University

February 29, 2012 | by the Office of Marketing and Communications 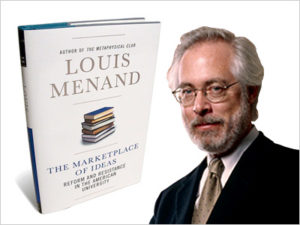 Louis Menand, a trenchant observer of the forces that shape higher education, says that “trying to reform the contemporary university is like trying to get on the Internet with a typewriter.”

He argues that this is because the institutional structure and educational philosophy of American higher education have not changed in the last hundred years, while other aspects—the demographics, the mission, the scale—have changed, dramatically.

Menand will explore this challenge, and what it brings to discussions taking place inside and outside academe about liberal education, when he presents The Marketplace of Ideas: Reform and Resistance in the American University on Thursday, March 15.

His 2010 book, The Marketplace of Ideas: Reform and Resistance in the American University, is part of Issues of Our Time, a series of books that explores “ideas that matter in the new millennium,” according to the series’ editor, Harvard scholar Henry Louis Gates Jr.

In The Marketplace of Ideas, Menand describes the evolution of the modern university, and whether some of the anachronisms that developed over time are worth preserving. He also examines when the liberal arts became segregated from professional education, why “interdisciplinary” has become a buzzword among professors, deans and graduate students, and what happened to the humanities disciplines after the 1960s.

Menand’s lecture is part of the Democracy Forum at Elmhurst College, a yearlong series of lectures on civic engagement and the promise and problems of democracy. It will begin at 7:00 p.m. in the Founders Lounge of the Frick Center. The lecture is free and open to the public.