May 12, 2014 | by the Office of Marketing and Communications 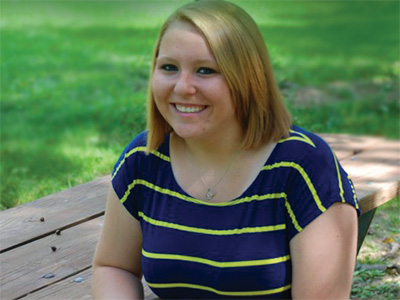 An aspiring teacher, Elmhurst sophomore Jenna Stutz believes in the power of education.

Her happy experiences with dedicated teachers in the schools of Lemont, Illinois, where she grew up, helped her decide that teaching was her calling. But Stutz knows that not every student can claim the educational opportunities she enjoyed.

As this year’s Jane Addams Social Justice Intern at Elmhurst College, she has spent the school year researching and writing about the roots of that injustice. “I wanted to look into the ways issues of race and poverty affect access to education. The more I learned, the more I wanted to be an advocate for education reform.”

Stutz’s internship grew out of a conversation she had with the Niebuhr Center’s director, the Rev. Dr. Ronald K. Beauchamp. After a discussion of social justice issues in Beauchamp’s Religion and Service class, Stutz told him that she was interested in the injustices in public education. He suggested she talk with Assistant Director Mark Draper about researching the topic. Stutz wrote up a proposal outlining her plans for investigating the subject, and over the summer she received word that she had been selected as the Jane Addams Social Justice Intern.

“I’d been hoping and waiting for it,” she said. “But I was still a little shocked to be selected. I was so excited.”

Stutz’s research took her deep into the history of American public education, culminating in the controversies of the current day, over issues like funding and school choice. Her research paper, which will be published in Investigations, Elmhurst’s undergraduate scholarly journal, won this year’s Ron Goetz Essay Prize.

Stutz is spending Spring Term working on projects to enlighten and inform the campus community about issues facing public education. She plans to bring expert speakers to campus and may introduce a proposal to expand Elmhurst’s tutoring program for local elementary school students in need.

“I want to bring these issues to everyone’s attention,” she said. “I believe that we need to work for social, political and economic change.”

Even as Stutz was researching the history of public education in America, she was experiencing current classroom realities as part of the observation prerequisite for education majors. Stutz spent time in both urban and suburban elementary schools.

“I’ve had the chance to get to know some of the students and to learn their stories,” she said. The experience has strengthened her commitment to teaching. “I want to work in a school of need, a school that can benefit from a quality teacher.”

Though she says she has long known she wanted to become a teacher, Stutz said her work as a social justice intern has made her understand more deeply the importance of her calling.

“This internship has only made my passion for teaching stronger,” she said. “Every student deserves a quality education. I want to help students who come from communities different from where I grew up. This is what I want to do with my life.”