September 7, 2012 | by the Office of Marketing and Communications 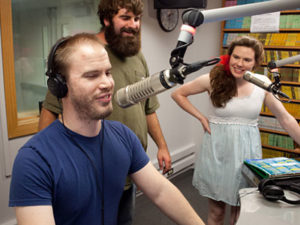 The 320-watt signal of WRSE, the student-powered radio station of Elmhurst College, may extend only a dozen or so miles from campus, but that hasn’t stopped the station from making a resounding impact across the landscape of Chicago radio over the past few decades.

Just consider some of the station’s famous alumni: There’s National Radio Hall of Famer Terri Hemmert ’70, who has been entertaining a loyal following at the pioneering rock station WXRT for nearly 40 years. There’s longtime business reporter Len Walter ’62, at WBBM NewsRadio 780. And there’s B96 deejay Justin Roman ’00, half of the popular pairing of Stylz and Roman.

Now the rising generation of Elmhurst deejays is enjoying the chance to work at a new and improved WRSE (88.7 FM), the result of two years worth of planning and renovations. The changes include a modernized, state-of-the-art main studio, with a new soundboard, phone system and fully digitized music collection. (Sorry, vinyl lovers, the last of the station’s LPs were sold off at a fundraising event last year—though some audiophile deejays still bring in their own old records to spin on the air.)

The enhancements will mean a richer, cleaner sound for the station’s audience. The station also has a new, more focused programming format, called Rock Variety, that encompasses everything from the Beatles to Coldplay to contemporary alt-rock.

“It’s a very professional environment now,” said Colleen Kelly ’13, the station’s program director, at an August 29 ribbon-cutting event at the renovated studios in the basement of the Frick Center. “We thought a lot about how we wanted to present ourselves as a station and about the opportunities we wanted students to have. We’re really excited about the changes.”

The improvements are already creating excitement on campus. Kelly, a psychology major from Lombard, said the number of students involved in the station has doubled in the past year or so, from about 30 to about 60. And those students are finding more and more professional opportunities beyond campus. The station, for example, partnered with Vocalo, the public media service associated with Chicago Public Radio, to offer student internships. That partnership fit nicely with the station’s plans to serve as a voice not just for the College campus, but for the wider Elmhurst community.

Kelly knows the station’s record of producing radio greats is impressive, but she says that working at WRSE has benefits even for those whose career goals don’t include a life in radio. She herself plans to work after graduation not as a broadcaster, but as a therapist.

“It’s just a lot of fun, and you learn a lot about yourself,” she said of her work at WRSE. “For me, it’s a little like therapy. It never fails to make my day better. When you’re talking to people on the air, you’re making some little impact on them. That’s a great feeling.”

“It’s nerve-wracking enough to go on the air for the first time,” Kelly said. “We never just throw people at the board. We explain the rules and etiquette of radio and make sure they get hands-on training.”

As she talked, a few of the station’s deejays were working in the gleaming, semi-circular announcer’s workspace in Studio A, preparing to launch the first day of programming for the new school year. One of them was a former WRSE deejay, Brian Lamberty ’11, who had been invited back to help launch the reinvented station. Lamberty was especially enthused about the new phone system, which allows deejays to take calls from listeners on air.

“Everything the deejay does is just the touch of a button now,” Lamberty said about the new digital system. “We’re really more like a legitimate, professional station now.”

More improvements are on the way. Next up are plans to create a new production studio, where pre-recorded segments can be made, as well as a live performance studio that could host the college’s student musicians and other artists.