For Michael Davis ’19, a 10-day trip to remote Rarotonga in the South Pacific Cook Islands combined an internship with the adventure of a lifetime.

The geographic information systems (GIS) major from Downers Grove, Ill., participated in an internship offered by Minnesota-based Global Treks & Adventures, a travel agency that publishes guides to remote destinations. “These are places you wouldn’t think of going,” he said. 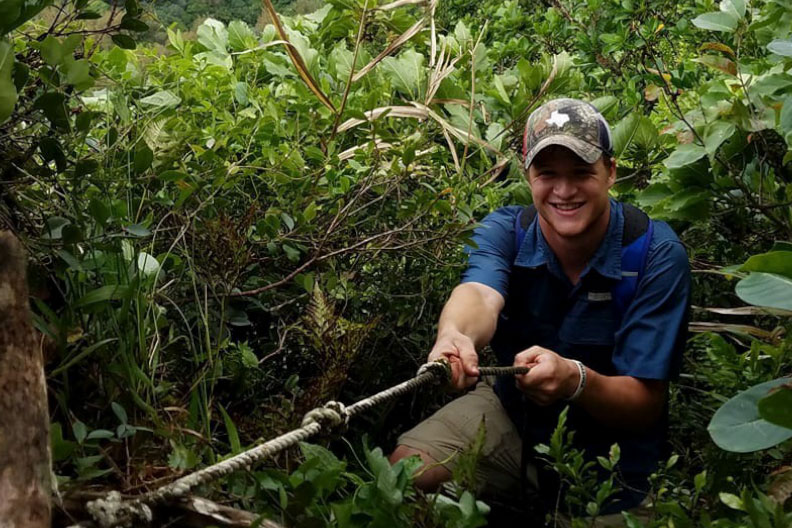 Davis traveled to Rarotonga with the company’s owners and 19 other student interns to gather the GPS coordinates of hiking trails, water stations and snorkeling beaches. Now that he’s back home, he’s creating maps based on those coordinates. He’ll receive a credit line when the maps are published in the company’s guides.

This was a once-in-a-lifetime opportunity.

Along with fellow student hikers and a guide, Davis took pictures of the trail conditions and the views. “The trails weren’t developed; it was more like bushwhacking through the woods,” he said. “Fortunately, there were no predators to worry about.”

There were only three TV channels, and he had no internet or cell phone service, “but I didn’t have a problem living without [a] phone,” he said. The group ate meals prepared by locals at a farmer’s market. “We snorkeled, played games and hung out as a group,” Davis said.

Now Davis has a second GIS summer job—mapping the location of stormwater pipes for the Village of Downers Grove. “I’m outside more than three-quarters of the day,” he said. “I enjoy being hands on, not sitting behind a desk.”