September 28, 2021 | by the Office of Marketing and Communications 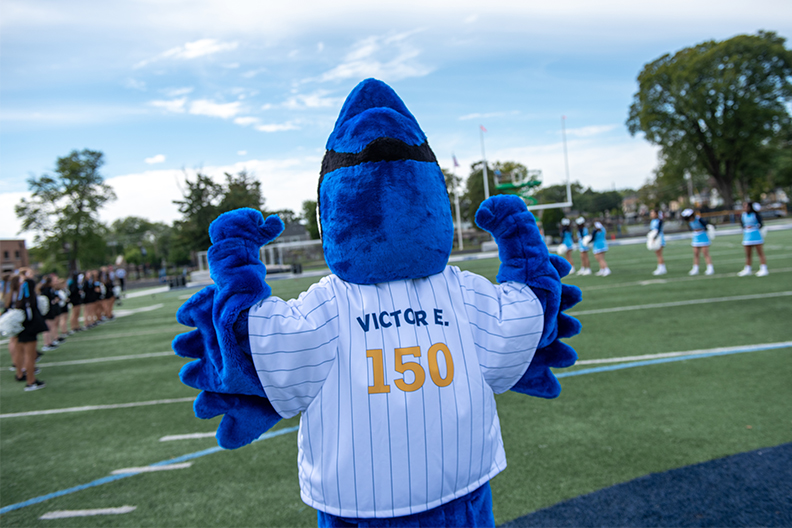 “Homecoming 2021: Cheers to 150 Years!” offered fun for the whole Bluejay family, including a lecture by a “Shark Tank” star, a Ferris wheel, a first-ever Elmhurst U. fireworks display, a parade on the streets around campus, a block party with more than a dozen giant inflatable games, a specially crafted beer, and an old-time baseball game.

The week of festivities began on Sept. 20 with a series of activities for students, including glow-in-the-dark mini golf, a variety show and a Ferris wheel by the football field.

Union Board/Homecoming Chair Ashley Liljeberg ’23 said the biggest hit with students was either the Ferris wheel or Founders Lounge Fun, which included a caricature artist, balloon artist, and photo booth.

On Thursday, Sept. 23, “Shark Tank” star Daymond John spoke to a crowd of more than 500 about his journey to fame and fortune in his talk “Diversity: A Good Business Practice.”

On Friday evening, students, employees, alumni and neighbors flocked to the Mall for the traditional bonfire and pep rally celebrating all the athletic teams; and, for the first time in University history, a fully loaded fireworks display.

The annual Homecoming Parade kicked off a day of activity on Saturday, with three dozen floats, vehicles, student organizations, student-athletes and others traveling a route through the neighborhoods adjacent to campus. The Student Athletic Advisory Council (SAAC) won the student organization entry with their float themed to Elmhurst’s onetime mascot, the Pirates. They received a trophy and $250.

Afterward, the block party and tailgating in the Alexander parking lot brought an estimated 2,000 attendees to the food trucks, street performers and 13 life-sized games and inflatables, including The Toxic Meltdown, Special Ops Obstacle Course and Zap-A-Mole.

Joseph Campbell, who teaches chemistry at Elmhurst U., went to the parade and block party with his wife, Shalini; son, Winston; and dog, Luna. It was their first Elmhurst homecoming, and Joseph Campbell said that while the Fall Term doesn’t feel quite back to normal yet, being back on campus with his students has been encouraging.

“It’s been great,” Shalini Campbell said of the Homecoming activities. “Everyone is so friendly, and the block party is way better than we ever imagined.”

Alumni and guests got to sample Elmhurst’s sesquicentennial “1871 Blue” beer, flavored with blueberries and crafted by Elmhurst Brewing Company. That evening the festivities continued, with alumni reunion gatherings and the Music Fest on the Mall featuring HiFi Superstar and American Idol contestant Manny Torres.

On Sunday, the Homecoming Sunday Service featured reflections on “The Role of the Chapel for the next 150” by the Rev. Kelly Stone ’03, chaplain and associate dean of religious and Spiritual Life at Macalester College. And that afternoon, Homecoming activities ended with a Town vs. Gown Vintage Baseball Game on the University Mall. The game, played by the “wildly different” baseball rules of 1857, featured faculty and staff from the University, led by President Troy D. VanAken, taking the field against representatives from the City of Elmhurst led by Mayor Scott Levin. Elmhurst University handily beat the City of Elmhurst team, 33-16.

“My personal favorite part of the week was seeing everyone attend all of the events,” Liljeberg said. After all of the hard work, it was a great experience to see everyone having a great time!”