October 7, 2021 | by the Office of Marketing and Communications

Ebrahim Moosa is the Mirza Family Professor of Islamic Thought and Muslim Societies in the Keough School of Global Affairs and the Department of History at the University of Notre Dame. 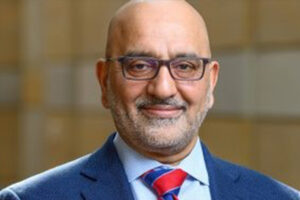 On Oct. 28, Moosa will present “Madrasa: Traditional Islam in the Modern World,” this year’s al-Ghazali Lecture at Elmhurst University, and part of the University’s Religious Literacy Project.

Moosa’s interests span both classical and modern Islamic thought, with a special focus on Islamic law, history, ethics and theology. At Notre Dame, Moosa co-directs Contending Modernities, a global research and education initiative that examines the interaction among Catholic, Muslim and other religious and secular forces. The project seeks to generate new knowledge and greater understanding of the ways in which these forces interact in the modern world, and to advance collaboration for the common good.

His book “Ghazali and the Poetics of Imagination” was the winner in 2006 of the American Academy of Religion’s Best First Book in the History of Religions.

The al-Ghazali lecture series at Elmhurst University honors the great Muslim scholar and theologian Abu Hamid al-Ghazali, who was born in Iran in 1058 but spent much of his life as a teacher in Baghdad and as a wandering ascetic. His prolific writings on religion, philosophy and Sufism had lasting influence on scholars from a variety of faith traditions.

The al-Ghazali lecture begins at 7:00 p.m. on Thursday, Oct. 28, in the Frick Center, Founders Lounge. Admission is free but reservations are encouraged, at elmhurst.edu/cultural.