October 11, 2019 | by the Office of Marketing and Communications 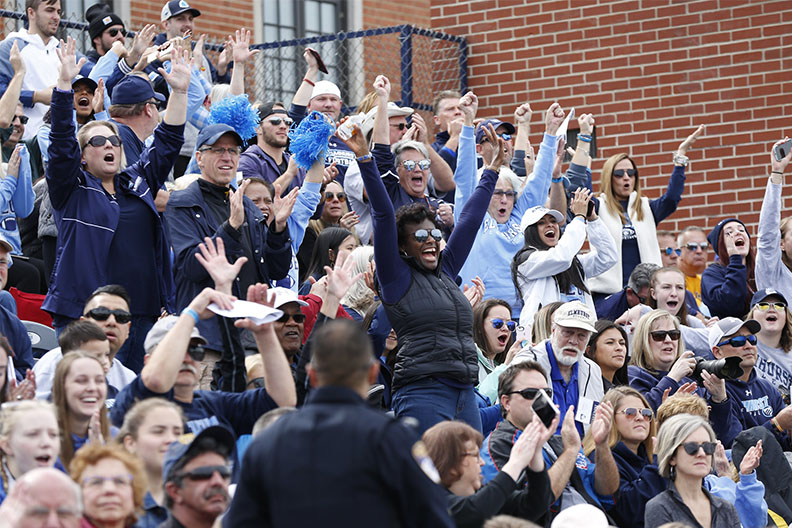 With perfect fall weather and a strong turnout, Homecoming 2019: Written in the Stars had something for everyone, including a parade down Prospect Avenue, joyful alumni reunions, a food-fueled block party, packed stands at the football game, and even a marriage proposal.

The week of festivities began on Sept. 30 with activities for students, including bumper cars in the Founders Lounge, women’s soccer and volleyball games, karaoke and the opening of “Cabaret” in the Mill Theatre.

Homecoming weekend kicked off Friday evening, Oct. 4, with reunion gatherings for the Class of 1969, alumni athletes and others. After dark, alumni and students crowded the Mall for a Homecoming concert, bonfire and rowdy pep rally led by new athletic director Wendy McManus and head football coach Jeff McDonald.

The next morning, more than a hundred spectators gathered along Prospect Avenue to cheer on the College’s inaugural Homecoming Parade. The Student Veterans Color Guard headed up the parade, and President Troy and Dr. Annette VanAken served as marshals. Some of the 36 other participating groups included the football team, the cheer and poms teams, the women’s and men’s soccer teams, student organizations, several Elmhurst businesses, a fire truck and a birthday cake float—a nod to the movie Animal House–built by members of the Facilities Management office.

“The parade was awesome! This was the first year and it was fantastic!” said Rebecca White, who came out for the parade with her husband and other family members. White’s daughter, Sarah, is a junior at Elmhurst who served as this year’s Homecoming chair. “I loved that the parade had different groups and activities at the College represented,” Rebecca White said, “and it’s just good to see the kids out there supporting each other.”

Not long after the parade ended, Eric Vincent ‘13 and his girlfriend, Katie Ball ’13, walked over to the Gates of Knowledge to look at the engraved paver bricks. After a couple of minutes, Vincent got down on one knee and proposed. Ball said yes, and soon was showing off a beautiful ring. In the tailgating area, their families helped the happy couple celebrate their engagement.

The second annual block party on Alexander Boulevard brought crowds of people to the food trucks and tents, where local businesses like Small Cakes and Kilwin’s sold sweet treats. Face painters, balloon artists and a magician kept everyone entertained.

That evening at the 50-Year Club dinner, President VanAken announced the establishment of the Carrol Ann Sumner Kniker Endowed Scholarship. Created by Kniker’s husband, Charles (Class of 1958), to honor his late wife, the scholarship will be awarded to a public schoolteacher pursuing a master’s degree in education at the College. Carrol Kniker ’59 would have celebrated her 60th reunion this year.

“The endowed scholarship that Charles has established in honor of Carrol will enable more teachers to enhance their skills and develop professionally, which will benefit more kids in more classrooms” VanAken said. “And it will carry on Carrol’s memory for generations to come.”