Football Team to Make First Trip to the NCAA Playoffs

November 12, 2012 | by the Office of Marketing and Communications 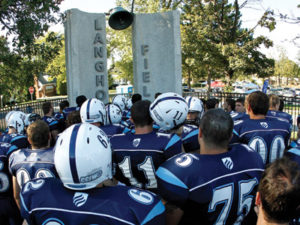 UPDATED November 13, 2012—For the first time in school history, the Elmhurst College football team will play in the NCAA Championships! Co-Champions of the CCIW, the Bluejays will travel to Coe College this weekend for the first round of the playoffs.

On Thursday, November 15, the campus community will celebrate the team’s historic season with a rally at 4:15 p.m. at Langhorst Field.

Elmhurst College President S. Alan Ray, the Reverend Dr. Ron Beauchamp and Intercollegiate Athletics Director Paul Krohn will lead the cheering for the team and their coaching staff, led by Tim Lester, before they head to Cedar Rapids, Iowa, to play the Kohawks.

The 17th-ranked Bluejays and the 10th-ranked Kohawks will play on Saturday, November 17. Kickoff is scheduled for 12:00 p.m. (CST).

For the first time since the 1980 season, the Elmhurst football team claimed a share of the College Conference of Illinois and Wisconsin (CCIW) Championship by defeating Illinois Wesleyan University 35-31 on Saturday night in front of a huge crowd at Langhorst Field. Leading for the entire contest, Elmhurst had to hold off a late fourth quarter surge from the Titans to score the win. (Read the full recap here.)

Elmhurst finished the regular season with a 9-1 record, setting a school record for most wins in a season. The Bluejays also posted a 6-1 record in CCIW play to finish in a three-way tie with North Central College and Wheaton College for the conference championship.

The Bluejays received an at-large bid to the NCAA playoffs on Sunday night; North Central claimed the league’s automatic bid to the playoffs based on a tiebreaker.

Elmhurst has won six straight contests entering the NCAA Championship. Coe is making its third playoff appearance in the last four years and the program’s eighth overall trip to the postseason. The Kohawks earned the Iowa Conference’s automatic bid to the NCAA Championship with an unblemished 10-0 record.

Elmhurst and Coe had one common opponent during the regular season in Loras College. Coe hammered Loras 69-7 on October 6 while Elmhurst blanked Loras 36-0 to open the season on September 1.

Tickets for the playoff game at Coe are $10 for adults and $5 for students. Tickets will be sold only at the gate and will go on sale at 10:00 a.m. on Saturday.