Home » News » For Two Alumni, New Gates of Knowledge was a Labor of Love

For Two Alumni, New Gates of Knowledge was a Labor of Love

July 16, 2020 | by the Office of Marketing and Communications 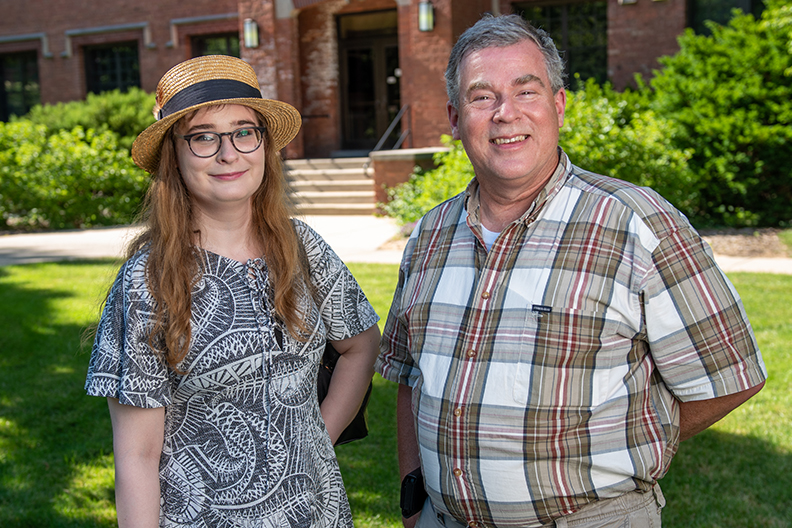 With a name change 150 years in the making, Elmhurst University officially came to be on July 1.

Nowhere is that new name more symbolically significant than at the University’s official entrance, the Gates of Knowledge. Fittingly, two generations of then-Elmhurst College graduates—a father and daughter—revitalized the arch that will welcome students to campus for years to come.

Edward and Erin Bartholomew, of the Sign Artist company, not only earned degrees from the University, but their family also has lived in Elmhurst for 18 years. Erin Bartholomew ’18 said working on the arch was an “amazing” creative experience.

“It’s such an iconic part of the University and an important part of my family’s history, that (this opportunity) felt too good to be true,” said Erin, who holds a bachelor’s degree in fine arts. “It was the perfect match for us.”

Edward Bartholomew, MBA ’10, president of Sign Artist, called it an honor to remake the arch to reflect the Elmhurst University name.

“The Gates of Knowledge signify both the history and commitment to excellence that characterizes the University,” he said. “The gates represent entry of students to a new stage of development. At the same time, they identify Elmhurst University. That harmony of aesthetics and function is central to the signs our company creates.”

To rejuvenate the wrought-iron Victorian-style arch, with its colorful Elmhurst shield cartouche at the pinnacle, the arch was carefully dismantled, sandblasted clean and restored.

As designer, Erin was responsible for ensuring that the new arch adhered to official University signage standards. She assisted in the sizing and coloring of the cast-metal letters, the layout of the words on the arch and the physical placement of the letters.

Although the Gates of Knowledge arch is the most visible and impactful of the signage changes on campus, it is just one of more than 100 that required the new name. Emerson and his team worked for nine months to prepare the updated signs for the July 1 unveiling, while planning for the more complex Gates of Knowledge restoration began about 10 months ago.

“Erin and Ed understood the significance of this effort,” Emerson said. “They made it their top priority to not just change the lettering on the arch, but to holistically redesign the arch as an enduring icon that will symbolize Elmhurst University moving forward.”