November 6, 2019 | by the Office of Marketing and Communications 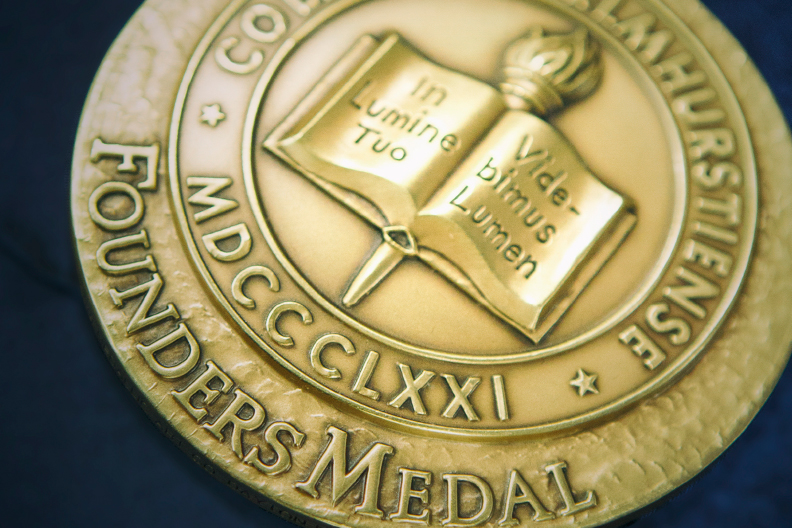 Elmhurst College recently presented the Founders Medal and Alumni Merit Awards to five people who have made outstanding contributions to the College, the community and society.

“Elmhurst College is honored to recognize these individuals who have distinguished themselves through professional excellence, service to our community and country, and a deep commitment to supporting the young people who will be our next generation of leaders,” President Troy D. VanAken said during the Founders Recognition Dinner on Oct. 25, when the awards were presented. 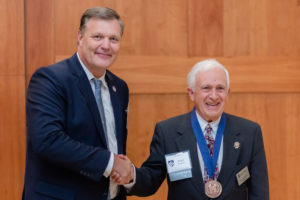 Established in 1978, the Founders Medal is one of the College’s most prestigious honors. The 2019 Founders Medal was given to business and civic leader Ralph Pechanio, and posthumously to longtime College Trustee Rudolf “Rudy” G. Schade Jr.

For more than 15 years, Pechanio has generously supported the College’s intern partnership with the Elmhurst Chamber of Commerce & Industry. In 2018, as part of the Chamber’s centennial celebration, Pechanio donated $100,000 to endow the Ralph P. Pechanio Student Internship Fund at the Chamber.

A longtime Elmhurst resident, he also has been a leader of several civic and service organizations in Elmhurst, especially those serving veterans. He has chaired the Elmhurst Veterans Memorial Commission since its inception in 1993, and has co-chaired Elmhurst’s Memorial Day Parade Committee since 1997.

Schade was a highly respected trial attorney and a 23-year member of the Board of Trustees with deep family and personal connections to the College. A resident of LaGrange, he passed away in March at the age of 77.

As a member of the Elmhurst College Board of Trustees since 1996, he served on a number of committees, including the executive, business and trusteeship committees. On campus, he also was known as the son of Rudolf G. Schade, a revered professor of history, Greek and philosophy. In 1984, Elmhurst alumni established the popular Rudolf G. Schade Lectures on History, Ethics and Law as a lasting tribute to Professor Schade. After his death in 2000, Rudy Schade regularly attended in his father’s place. 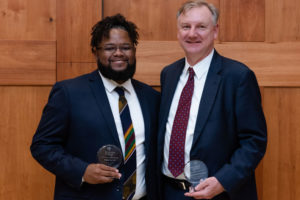 The Alumni Merit Awards celebrate Elmhurst graduates who have made exemplary contributions to the community and to their alma mater. The Young Alumni Award was presented to Phillip Lee ’14, of Chicago, who has dedicated himself to working with young adults as a therapist and counselor in private practice and through organizations like Mercy Home for Boys and Girls.

The Distinguished Service to Alma Mater award honored Richard Dabrowski ’85, of Glen Ellyn, a partner for the wealth management firm Mercer who has mentored and shared his knowledge with Elmhurst business students for several years.

Lori Tompos, MBA ’15, of Elmhurst, received the Distinguished Service to Society Award in recognition of her military service—she is a Desert Storm and Gulf War veteran and was among the first American women to serve in combat–and her work as a leadership consultant and adjunct faculty member in Elmhurst College’s business department.