July 9, 2013 | by the Office of Marketing and Communications 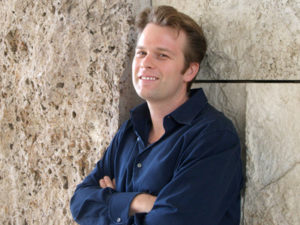 Elmhurst College is pleased to announce that musician and producer Gerhard Guter will be joining the music faculty as assistant professor of jazz studies and music business in the fall of 2013.

A composer, arranger, producer and multi-instrumentalist, Guter has written and produced music for The History Channel, World of Warcraft, Celebrity Cruises and Microsoft. Guter’s orchestral music has also been featured at the Orpheum Theater for the Ovation Awards in Los Angeles. As a vocalist, he is a member of the vocal jazz quintet Vocalogy, which has released two albums to date.

A certified Avid Pro Tools HD and Icon operator, Guter has engineered and co-produced several full-length albums, with his most recent credits including producer, editor and arranger of Vocalogy: Refilled. His instrumental and vocal works are distributed through Walrus Music Publishing, UNC Jazz Press and Sound Music Publications. Guter is the author of Integration of Vocal and Instrumental Ensembles in the Jazz Idiom, which is composed of original interviews with the late, great Gene Puerling.

Guter has taught a wide breadth of courses at the college level, including music business, jazz theory, jazz piano, MIDI, music theory, music notation and recording arts. He is a graduate of the University of Miami and California State University Long Beach and served as director of the Studio Jazz Big Band at the Bob Cole Conservatory of Music (CSULB). Guter has also served as a consultant to several colleges looking to expand their commercial music offerings.