The Good Times Soar at Homecoming 2022

October 6, 2022 | by the Office of Marketing and Communications 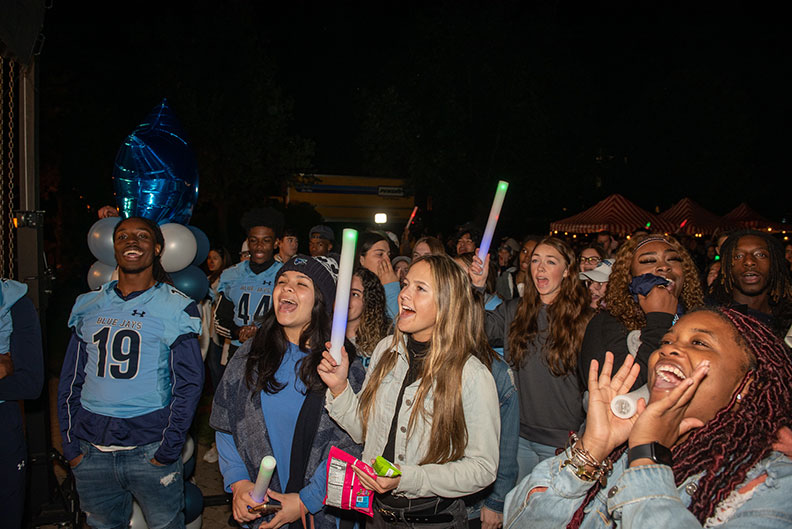 Under bright fall skies, Homecoming 2022 had something for everyone, including a nighttime drone display, a morning parade, football and soccer games, and a family- and food-friendly block party.

With a theme of “Let the Good Times Soar,” the week of festivities began on Sept. 26 with activities for students, including a Zero Gravity carnival ride, entertainment and athletic contests, and “The Spitfire Grill” in the Mill Theatre.

Homecoming & Reunion Weekend kicked off Friday, Sept. 30, and saw reunion gatherings for the classes of 1962 and 1972 (the 50-year reunion class), Honors Program and ELSA alumni, and others. As the sun was setting on Friday, alumni and students crowded the Mall for a Homecoming concert with alt country artist Gina Venier ’12, plus the traditional bonfire and pep rally.

The Mall then lit up with a spectacular drone display. Each drone moved into formations that created University-related designs in the night sky—spelling out “Elmhurst” at one point and creating a silhouette of the Hammerschmidt Memorial Chapel at another.

Saturday morning, spectators gathered along Prospect Avenue to watch the Homecoming Parade, with former University Board of Trustees Chairman Edward J. Momkus ’74 serving as grand marshal. Some of the other participants included the cheer and poms teams, several sororities and fraternities, Union Board and other student organizations. The Student Athlete Advisory Council’s float, festooned with blue and white and brimming with energetic students, was voted the best in the parade.

The Bluejay Block Party and tailgating tents on Alexander Boulevard brought out crowds of alumni, students and Elmurst U. families for food trucks, music, games and entertainers.

The weekend also provided a time for reflection. During a poignant ceremony on Saturday, a bench facing Alumni Circle was dedicated to associate professor of communications Deatra Sullivan-Morgan, a beloved mentor of students who died in November of 2019.