June 2, 2022 | by the Office of Marketing and Communications 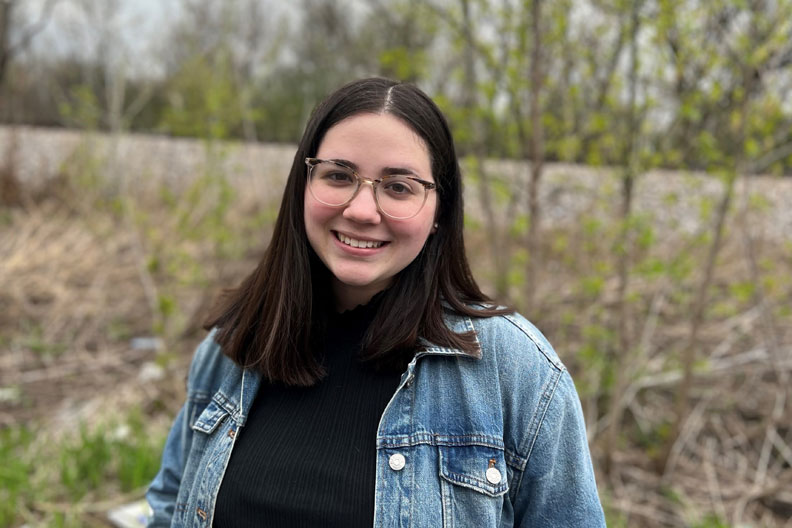 Third-year honors student Hailey Nicholas ’23 has accomplished something no other student has in the 150 years of Elmhurst University. She has been awarded a prestigious Udall Undergraduate Scholarship from the Udall Foundation.

“It’s very exciting. It still kind of feels unreal,” Nicholas said. “I don’t know when it will start to feel real—probably when I go to Arizona in August and meet the other scholarship recipients.

“I get this awesome label as Udall Scholar, which stays with me for life.”

An environmental studies major, Nicholas is one of just 55 students in the 2022 class of Udall Scholars. The recognized students emerged from a pool of 382 candidates from 181 colleges and universities. A 20-member independent review committee selected the group of sophomores and juniors based on their leadership, public service, and commitment to issues related to Native American nations or to the environment.

As a Udall Scholar, Nicholas receives $7,000 toward her education and will meet fellow scholars at the Udall Scholar Orientation in Tucson, Arizona, in early August. While there, she’ll meet program alumni and interact with community leaders in environmental fields, Tribal health care, and governance.

“If I didn’t decide to be in the Honors Program, I don’t know what I’d be doing right now. It’s helped me out so much, and I’m so grateful,” said Nicholas, of Mokena, Ill. “Ms. Mancini and Dr. Mulvaney have been very encouraging.”

“Hailey is a very bright, hardworking and collaborative individual who is genuinely passionate about being a change agent in a troubled world,” she said. “Hailey is exactly the type of woman who is going to make a significant difference in our society!”

After she graduates, Nicholas plans to pursue a master’s in urban and environmental planning with the goal of becoming an urban planner. At Elmhurst, Nicholas is the vice president of Greenjays, the university’s sustainability club. She recently was named to the 2022 class of Newman Civic Fellows. She also serves as an intern with the City of Wood Dale, working with an urban planner addressing residential stormwater management and zoning regulations.

Students interested in applying for the Udall Undergraduate Scholarship or any other national fellowship or scholarship should contact Marisa Mancini, Coordinator for National Fellowships and Scholarships, at marisa.mancini@elmhurst.edu.