November 30, 2022 | by the Office of Marketing and Communications 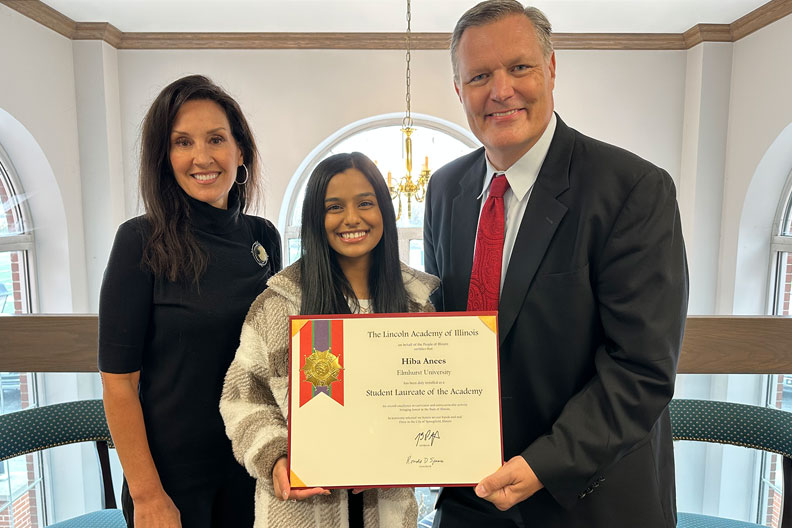 Anees was among the outstanding students representing Illinois’ colleges and universities to be honored with the award, which is presented by The Lincoln Academy of Illinois.

She and the other student laureates were recognized via a congratulatory video that also featured messages from past recipients of the Order of Lincoln, the state’s highest award given to exceptional Illinoisans for individual achievement.

In the spirit of the 16th U.S. president, Lincoln Student Laureates are honored for their leadership and service in the betterment of humanity, and for overall excellence in curricular and extracurricular activities. The award recognizes one senior who is selected from each of Illinois’ four-year, degree-granting colleges and universities, as well as a student from one of the state’s community colleges.

Anees, of Woodridge, Ill., said it was “amazing” to win the award because it illuminates how the University has nurtured her throughout her time as a student.

“I love the community here and how I can be involved and feel that my voice is being heard, and that what I say matters,” she said. “To be honored for representing Elmhurst means so much to me.”

A special education major at Elmhurst, Anees has been active on campus as a student leader.  She served as president of the Student Government Association and as a member of the executive team on the Union Board, and is a Student Ambassador. She also is a member of the Muslim Student Association, a peer advisor for first-year students, and a life coach and advisor for students in the Elmhurst Learning and Success Academy.

After graduation next May, Anees plans to become a special education teacher and hopes to stay connected to the University. She ultimately would like to become a principal so that she can advocate more strongly for students with disabilities. “I can do a lot as a teacher but can do even more as a leader,” she said.

The 2022 Lincoln Academy Student Laureate induction ceremony can be viewed at TheLincolnAcademyofIllinois.org.