Julie Nixon Eisenhower to Speak about Life in the White House

January 23, 2015 | by the Office of Marketing and Communications 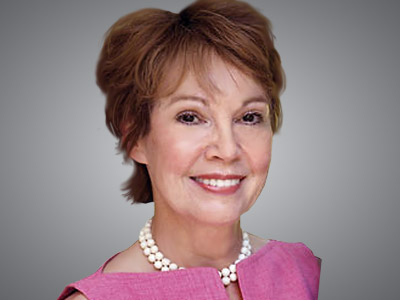 The younger daughter of President Richard M. Nixon, Julie Nixon Eisenhower is a best-selling author, editor and speaker on such subjects as the presidency, women in politics and life in the White House.

Eisenhower will present Inside the White House: Then and Now on February 12 at Elmhurst College. Julie Nixon Eisenhower is the author of three books—Pat Nixon: The Untold Story; Special People; and Julie Eisenhower’s Cookbook for Children—and has lectured for more than 25 years. She also is a lifelong volunteer. During the Nixon administration, her efforts on behalf of children, the elderly and the environment led to her being voted one of the Ten Most Admired Women in America by Good Housekeeping readers on four occasions. In the 1980s, she was an advocate for special-needs children. Eisenhower currently serves as a trustee for the Richard Nixon Foundation, the Nixon Center and the Eisenhower Medical Center, and is on the advisory board of A Few Good Women: Advancing the Cause of Women in Government.

“Inside the White House: Then and Now” will begin at 7:00 p.m. on Thursday, February 12, in the Founders Lounge of the Frick Center.  Eisenhower will be available to sign books after the lecture. Pat Nixon: The Untold Story will be available for purchase. Eisenhower’s talk is part of the Rudolf G. Schade lecture series at Elmhurst College, and is sponsored in part by BMO Harris Bank.

Admission is $10 for the general public and free for Elmhurst College students, faculty, staff and alumni. Tickets are available online or at the door. For more information, call (630) 617-3390.