May 8, 2019 | by the Office of Marketing and Communications 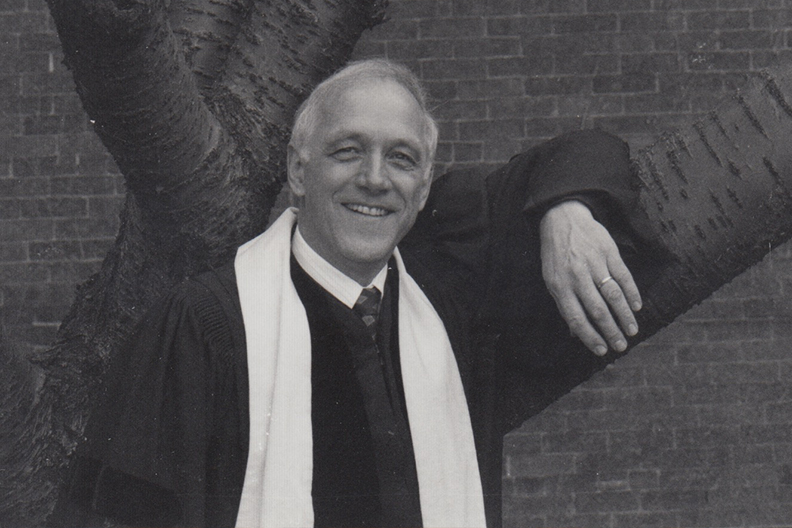 At this year’s commencement ceremony for undergraduate students, the Elmhurst College Board of Trustees will confer an honorary doctoral degree on Richard L. Stanger ’58, a third-generation alumnus and a revered minister and professor whose family ties to the College span more than 130 years.

On Saturday morning, June 1, Stanger will receive an honorary Doctor of Divinity degree and will deliver the commencement address to the Class of 2019.

Stanger’s connections to Elmhurst College reach back to 1887, when his grandfather, Christian, became a student at Elmhurst and then taught there for many years. Richard Stanger’s father, Robert, graduated from the College in 1918 and was elected its ninth president in 1957—the same year that Richard, then a student at Elmhurst, was elected president of the student union. He met his wife, Joan Panos, on campus, and they enjoyed a long marriage until she passed away in April 2015.

After graduating from Elmhurst College in 1958 with a bachelor of arts degree in philosophy and history, he earned his master of divinity from McCormick Theological Seminary and became chaplain and a professor of philosophy and religion at MacMurray College in Jacksonville, Ill. While at MacMurray, he earned his Ph.D. from the University of Michigan.

As a United Church of Christ minister, Stanger spent much of his career as senior minister at several Plymouth Churches around the United States, including in Ft. Wayne, Ind., Brooklyn, N.Y. and Miami, Fla.

The Stangers have three children and nine grandchildren. Their daughter Allison became the fourth generation of Stangers to attend Elmhurst College when she entered in 1978. Their daughter Karen and her husband established a scholarship at Elmhurst; and Dr. Stanger’s brother, Ron, and his wife have made major gifts to the Robert and Juel Stanger Scholarship Fund. The Stanger family received the Elmhurst College Founder’s Medal in 2016, in honor of the many ways they have served and contributed to the College.