May 31, 2019 | by the Office of Marketing and Communications 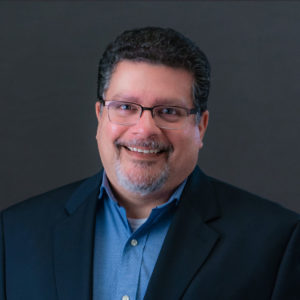 The Council of Independent Colleges (CIC) recently selected Paul Arriola, associate dean of the faculty at Elmhurst College, to participate in the 2019–2020 CIC Senior Leadership Academy.

Arriola was one of 41 administrators in higher education nationwide to be selected for the program by the CIC, an association of 770 nonprofit independent colleges and universities and other higher education affiliates that supports leadership development and enhances public understanding of independent higher education’s contributions to society.

The people chosen for the yearlong program are leaders in higher education who have been identified by their institutions as having the potential to assume more senior leadership positions in independent colleges or universities.

Joining the Elmhurst College faculty in 1995 as an assistant professor of biology, Arriola became a full professor in 2007 and chair of the biology department in 2012. He has served as associate dean of the faculty since 2017, and has launched initiatives to improve student advising, enrollment and retention.

Arriola said he became interested in the CIC academy because he wanted to learn more about role of the chief academic officer at a college or university, and how to be “an effective leader and change agent.”

“I hope to learn more about how academic affairs is run at other colleges and perhaps learn some new strategies that I can bring back to Elmhurst to help us navigate the changing higher education landscape,” he said.

Arriola will participate in the leadership academy’s opening seminar in Baltimore in November, and a closing seminar in Washington, D.C., in June of 2020. He also will take part in a mentoring program, work with experts, participate in webinars and engage in a series of readings and case studies during the academic year.

“Because the generation of senior leaders now on campus is rapidly approaching retirement, the need for able new leaders is significant,” said CIC President Richard Ekman. “Competition for the available places in the program was intense, and the review committee found the nomination materials to be most impressive. We believe that Dr. Arriola has the potential for highly effective leadership in a position of senior responsibility on campus.”