President of Catholic University of America to Speak at Elmhurst

October 29, 2013 | by the Office of Marketing and Communications 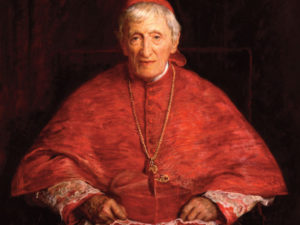 John H. Garvey is the 15th president of the Catholic University of America.

On November 1 at Elmhurst College, he considers the enduring legacy of John Henry Newman’s vision of an institution designed to educate “the intellect to reason well in all matters, to reach out towards truth, and to grasp it.”

John Henry Newman (1801-1890) was an Anglican priest who converted to Catholicism and eventually was made a cardinal by Rome. He was a thinker and author, as well as an educator at Oxford University who later helped to create the Catholic University of Ireland. Pope Leo XIII made him a cardinal in 1879, and Pope Benedict XVI beatified him in Birmingham, England, in 2010.

John Garvey has been president of the Catholic University of America since 2010. He has become known for establishing a less formal tone on campus while shifting attention toward more open debate and a well-rounded experience for undergraduates.

“The challenge for Catholic universities is finding a place for Bibles and papal decrees between our telescopes and microscopes,” Garvey said during his inaugural address. “I think the fault for this flat, crabbed, cartoonish vision of Catholic higher education lies not with the critics of religion, but with us. We have been so intent on defending ourselves against charges of fundamentalism and censorship that we have failed to create, let alone promote, a serious Catholic intellectual culture.”

Before taking the helm at Catholic University, Garvey served as dean of Boston College Law School, and as president of the Association of American Law Schools. He has authored books on subjects ranging from the U.S. Constitution to Catholicism and sexuality, earning him awards from the Alpha Sigma Nu Jesuit (2011) and the Catholic Press Association (2007).

Garvey’s talk will begin at 7:30 p.m. on Friday, November 1, in Irion Hall’s Buik Recital Hall on the Elmhurst campus. Admission is $10 for the general public and free for Elmhurst College students, faculty, staff and alumni. Tickets are available online or at the door. For more information, call (630) 617-3390.