December 18, 2014 | by the Office of Marketing and Communications 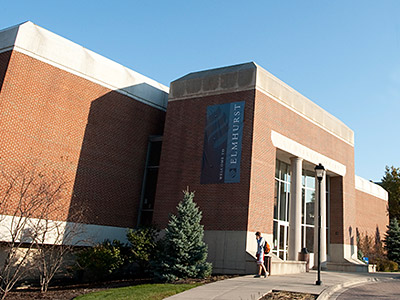 William Shakespeare wrote that all the world’s a stage.

On a recent fall evening, the A.C. Buehler Library at Elmhurst College gave new meaning to that phrase.

That evening, an ambitious group of Elmhurst student actors, writers and directors gathered at the library with sleeping bags and cups of coffee to write and rehearse six 10-minute plays in 24 hours. They worked through the night, and performed the plays the following evening in various spaces in the library.

“We’re busting art out of its spaces,” said Assistant Librarian Peg Cook, an organizer of the Library Lock-In. “The visual arts tend to be a little bit more spread out across campus—here and the Accelerator [Gallery] and the Frick Center. This is an opportunity for the theatre program to leave its home in the Mill Theatre.”

The newly formed troupe incorporated unconventional “found spaces” as venues, from the back book stacks to the main stairwell. During the Saturday evening performance, a bell announced the start and end of each play, with the audience moving from space to space as the performance progressed.

The 24-Hour Library Lock-In was funded by a $5,000 “Back to Books” grant the library received from the Illinois Secretary of State’s office. “It was meant to purchase materials for the library in conjunction with some kind of programming,” explained Cook. “We bought theatre books. We probably have one of the best theatre collections in the state now!”

All six plays were written on the topic of minority, chosen by Lock-In organizers in conjunction with the Office of Student Affairs. “Nobody came in with a preconceived notion of the subject, or a play they already formulated,” said adjunct theatre professor Andrew Behling, one of the event organizers. “It was a really honest and immediate response to the discussion.”

The resulting plays addressed the theme in eclectic and unexpected ways, from invisible disabilities and mental illness to race, class and privilege. For example, How Minority Conflicts Would Change Disney Movies took a tongue-in-cheek look at classic kids’ films.

“It’s a super awesome learning experience because it’s high-pressure,” she says. “A small [theatre] program gives me the ability to do things like this—and to be involved as a freshman, sophomore and junior.”

Cook herself oversaw the overnight event, grabbing a few hours of sleep in her office. A former theatre geek, she didn’t plan on taking the stage herself, but one role turned out to be a perfect fit: a librarian.

“It’s been 20-plus years since I acted in any sort of capacity, so this has been a really fun day for me,” she said. “Even though I had three hours of sleep last night!”