Home » News » The Meaning and Significance of ‘Dora the Explorer’

The Meaning and Significance of ‘Dora the Explorer’

September 30, 2013 | by the Office of Marketing and Communications 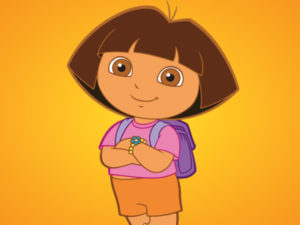 The children’s TV series Dora the Explorer, which features the bilingual adventures of a 7-year-old Latina named Dora, has been a ratings and marketing hit ever since it first aired in 2000.

Yet the show’s popularity has coincided with a rise in anti-immigrant sentiment focused largely on Latinos.

Nicole Guidotti-Hernandez, who teaches at the University of Texas and is the associate director of its Center for Mexican American Studies, will discuss this dichotomy when she presents The Meaning and Significance of Dora the Explorer on October 3 at Elmhurst College.

In a 2010 blog piece for Ms.Magazine.com, Hernandez described her interest in Dora the Explorer:

“I’ve been following her career since I saw an ad about her in Latina Magazine in 1999, announcing the arrival of the first positive Latina role model for girl children in the form of a Nickelodeon cartoon. For some, it may seem strange for an academic to be so invested in the transnational travels of a seven-year-old Latina cartoon character, but let me say that Dora Marquez has changed how we think about Latinas, for better or worse.”

Guidotti-Hernandez’s research interests include American studies, transnational feminisms, Latino/a studies and borderlands history. She is the author of the 2011 book, Unspeakable Violence: Remapping U.S. and Mexican National Imaginaries. Her Latino Studies journal article, “Dora the Explorer, Constructing ‘Latinidades’ and the Politics of Global Citizenship,” remains one of the most downloaded articles in the journal’s history.

Guidotti-Hernandez’s talk at Elmhurst will begin at 7:00 p.m. on Thursday, October 3, in the Buik Recital Hall in Irion Hall. A book-signing will follow the lecture. For educators, Guidotti-Hernandez’s lecture qualifies for Continuing Professional Development Units (CPDUs). Forms will be available at the event. Admission is $10 for the general public and free for Elmhurst College students, faculty, staff and alumni. Tickets are available at the door or online. For more information, call (630) 617-3390.