Elmhurst Names Winners of Founders, Senior of the Year Awards

May 15, 2020 | by the Office of Marketing and Communications

During the Elmhurst College 2020 Student Leadership Awards, four seniors received the Founders and Senior of the Year awards, considered among the College’s top honors for individual student achievement.

Held virtually on Tuesday, May 12, the Third Annual Student Leadership Awards celebrated students who have made a distinctive positive impact on the campus over the past academic year. A wide variety of awards was presented, including club and organization awards, athletics and Greek awards, and Bluejay of the Year.

“You have gone above and beyond to support, promote and embody the excellence of Elmhurst College,” said Phillip Riordan, vice president for student affairs. “We thank you for your commitment and contributions.”

The event also recognized the winners of the Founders Awards and Senior of the Year for their service and leadership.

Shawndell Young, a music business major from Cedar Rapids, Iowa, received the Founders Award for Service to the College Community. Young, a senior, has served in many leadership roles on campus, as an RA and in student government and in campus organizations such as the Black Student Union, Union Board and the President’s Advisory Council for Strategic Planning. He also was active in the choral music program and in performance ensembles such as the Late Night Blues Jazz Ensemble and Jazz Lab Band. He is especially known for founding and producing the student talent showcase EC on the Rise. After graduation, Young will return to Elmhurst to pursue an MBA.

Emily Marquez, an English and communications major from Shiloh, Ill., received the Founders Award for Service to the Greater Society. A member of the Honors Program, Marquez, a senior, also is a member of three honor societies and has held multiple leadership positions on campus, including Alpha Phi Omega, Asian Club, the Electrify Student Leadership Retreat and Union Board. She also served as one of the student-leaders in the EC Connections orientation program, which introduces Elmhurst’s students of color to one another. Marquez is most proud of her own identity development as a woman of color, and has been committed to serving marginalized student groups on campus.

Rebecca Kaltenbach, a senior and nursing major from Lake in the Hills, Ill., received the Cureton Award for Service to the Global Community. Two nursing faculty nominated Kaltenbach for the award, for her significant work serving others through Habitat for Humanity and, in particular, several service-learning trips she has taken to Jamaica to work in the Robin’s Nest Children’s Home. She described her experiences at the orphanage as life-changing, and vowed to bring everything she learned there to her nursing career. “I will make sure my patients always feel heard, that they never feel alone, and that they can trust me to take care of them,” she wrote in her nomination essay.

The 2020 Senior of the Year is Alexandria Schultz (pictured below), a political science major from Elk Grove Village who established herself as a known leader on campus. Her involvement and impact spans various parts of the campus and includes serving as president of the Student Government Association, a competitor on the Mock Trial team, and as a member of the Sigma Kappa sorority. She has also taken part in multiple academic honor societies, including Omicron Delta Kappa, Pi Sigma Alpha and Pi Gamma Mu. Her nominator wrote that Schultz “led by example, always prepared to go above and beyond to contribute to the success of the team.” 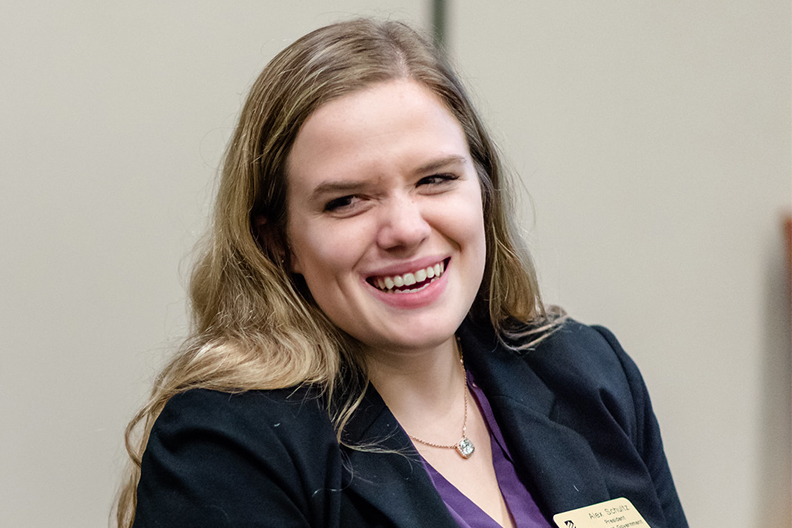