September 11, 2020 | by the Office of Marketing and Communications

Elmhurst University has received a $1.8 million gift—one of the largest donations in the institution’s history—from the estate of George Howard Baechtold ’50, a longtime donor and friend to Elmhurst.

The gift will support a number of causes and needs at Elmhurst, including a new scholarship for students from underrepresented groups.

“George had the foresight to leave the designation of his gift unrestricted, and to be used for the institution’s most pressing needs,” said Valerie Day, vice president of institutional advancement at Elmhurst. “A portion of his gift will go to support the newly established President’s Scholarship for Diversity, Equity and Inclusion, which aligns with his passion and lifelong work.” 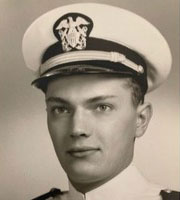 Baechtold, who studied math at Elmhurst, joined the U.S. Navy after graduation and served as an officer during the Korean War. After leaving the Navy as a full lieutenant, he went on to a career in law before discovering a passion for teaching. He joined the business law faculty at California State University Northridge in the 1970s and never looked back.

“George was passionate about teaching,” said Melanie Stallings Williams, Baechtold’s longtime friend and colleague. “He loved the intellectual inquiry of it, and he was made fresh by all the questions and engagement with students. He was also passionate about standing up for the underdog, so I know he would be very pleased that his gift will help marginalized students.”

Baechtold had a long tradition of giving at Elmhurst that spanned more than 43 years and encompassed support for everything from the chemistry department to the campus arboretum to the University’s American Dream Scholarship for first-generation college students.

“Elmhurst was a really profound experience in George’s life,” said Williams. “At Elmhurst, he found a community of other people who were also interested in ideas and intellectually curious. It was a place for him to make that transition from childhood to who he really was.”

Baechtold passed away on Dec. 7, 2019. He is survived by his husband, Joseph Baechtold-Moreno.

“Alumni like George represent the best of Elmhurst University,” said Troy D. VanAken, president of Elmhurst University. “George was a positive influence on our campus during his days as a student, and as an alumnus he made the world a better place. I am personally grateful that George’s philanthropy will assist so many of our current and future students.”

Visit the Alumni and Friends Page