September 9, 2021 | by the Office of Marketing and Communications 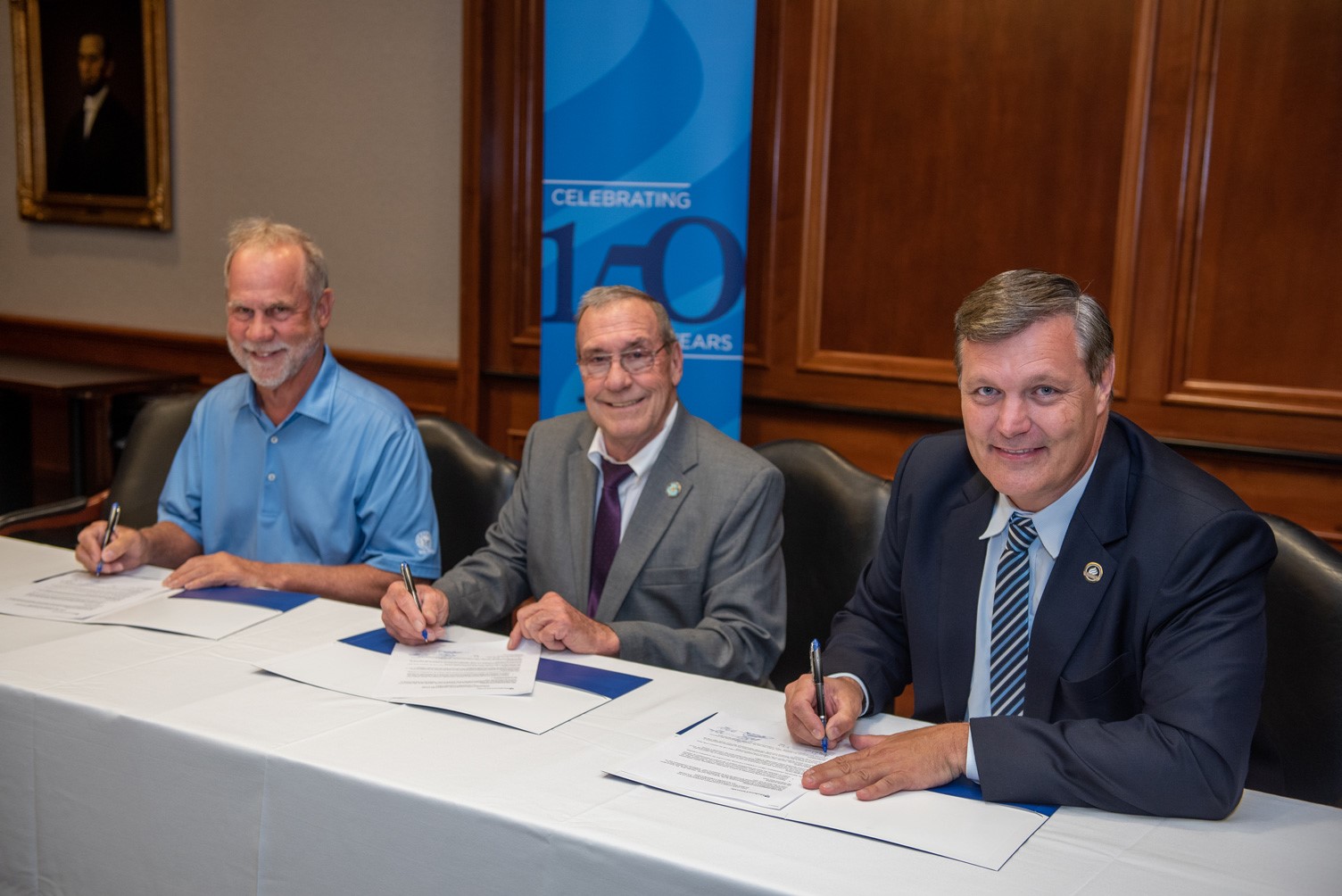 Tim and Robert Jans (from left), with Elmhurst University Troy D. VanAken, recently approved a $3.4 million gift that will enable more students to explore careers in the military and support student veterans at Elmhurst.

Two brothers with multi-generational ties to Elmhurst University are giving the University $3.4 million to implement a comprehensive initiative that will introduce more STEM students to careers in the military while also supporting student veterans on campus.

The gift from Robert Jans, of Brookfield, and Tim Jans ’74, of Elmhurst, represents the largest the University has ever received from living donors. The agreement became official during a signing ceremony in August.

Inspired by Robert Jans’ lifelong interest in supporting the military and veterans, and Tim Jans’ desire to provide more opportunities for Elmhurst students, the gift establishes:

“Elmhurst University is deeply grateful for this extraordinary gift from Robert and Tim Jans,” said President Troy D. VanAken. “Its goals mesh perfectly with Elmhurst University’s commitment to preparing active service members, veterans, and all of our students to succeed in an increasingly complex economy and world.”

Both recently retired, Robert and Tim Jans were the longtime owners of Cook-DuPage Transportation Company, Inc., a provider of mobility-limited transportation services. The brothers founded the company in 1973, after Robert Jans had finished serving in the military and as Tim Jans was completing his senior year at Elmhurst.

Their gift reflects the legacy and values of the brothers and their families. Their parents met at then-Elmhurst College in the 1940s, and several other relatives, including two siblings and a great-uncle, also attended Elmhurst. A number of years ago, Tim Jans, his wife, Cynthia, and his siblings established the Arthur and Anne Marie Jans Endowed Scholarship Fund in honor of their parents.

“I enjoyed my years at Elmhurst, and got help to be able to stay at a time when my family couldn’t make the payments. Now’s the time to give back,” he said, adding that he hopes his gifts “will help some students find themselves.”

Robert Jans is a longtime supporter of military education and the current chairman of the Defense Orientation Conference Association (DOCA), a nationwide nonprofit that educates civic and business leaders on defense, foreign policy and national security issues. Over the years, as Jans visited military installations for his work with DOCA, he frequently heard about the need for more enlistees with STEM backgrounds, and wanted to do something to better connect talented students with potential careers in the military.

“I’d hear from my military connections about losing these students to Silicon Valley or Wall Street, even though they could enter jobs in the military field at a high level and find them to be lucrative and impactful,” he said.

He hopes the new internship fund at Elmhurst will “empower and bring awareness to” these students, and eventually draw some into military careers.

“It’s about giving them the opportunity,” he said.