December 2, 2012 | by the Office of Marketing and Communications 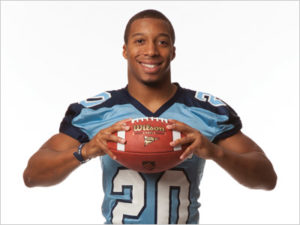 Elmhurst College running back Scottie Williams (Woodridge/Downers Grove South) has won the Gagliardi Trophy, an annual award given to the most outstanding football player in NCAA Division III.

Williams, a senior, is the first Elmhurst player to earn the prestigious award, which honors excellence in athletics, academics and community service. He also is just the fifth running back to receive the honor over the past 20 seasons.

The award was presented this evening in Salem, Virginia, during a banquet that kicked off the festivities surrounding the NCAA Division III Championship Stagg Bowl. Williams attended the banquet with his family and Elmhurst College head football coach Tim Lester.

“I am truly speechless right now,” said Williams. “I am grateful for this honor but am more blessed to have been around a fantastic group of coaches who helped me achieve all of this.”

Williams powered Elmhurst to its best football season in school history. The Bluejays set a school record for wins in a season (10) and won a share of the College Conference of Illinois and Wisconsin (CCIW) title for the first time since the 1980 season. In addition, the Bluejays advanced to the Sweet 16 of the NCAA Playoffs, becoming the first Elmhurst team to be selected to the NCAA playoffs and win an NCAA playoff game.

Named the CCIW’s Offensive Player of the Year and a National Football Coaches Association All-American in 2012, Williams sparked Elmhurst’s rushing attack and rewrote the College’s record book in the process. He set new Elmhurst single-season records for rushing yards (2,046) and rushing touchdowns (22) this season. He averaged 170.5 yards per game, ranking second in Division III in rushing, and 6.2 yards per carry this season while also catching 23 passes for 182 yards and two touchdowns.

“Scottie is one of the most humble players I’ve ever met, and he possess all the qualities that we look for when recruiting players to Elmhurst College,” said Elmhurst head coach Tim Lester. “I couldn’t be any happier for Scottie and his family.”

A true student-athlete, Williams has had success in the classroom as well. He has twice earned Academic All-Conference honors and was a first-team Capital One Academic All-American in 2011.

Off the field, Williams has participated in President Barack Obama’s Interfaith and Community Service Campus Challenge, a nationwide initiative to promote interfaith dialogue and cooperation. He also helped build homes as part of the College’s Habitat for Humanity chapter.

Along with his teammates, Williams helped raise funds for a variety of causes. He participated in the College’s annual Relay for Life fundraiser for the American Cancer Society and also helped raise money for the Ray Graham Association, a local organization that provides opportunities to people with disabilities. The son of a pastor, Williams also has volunteered at a vacation bible school at his father’s church, the Metropolitan Missionary Baptist Church.

“There are a lot of awards that only recognize athletic achievement,” said Williams. “Winning an award that also recognizes your accomplishments as a student and for giving back to the community makes this honor that much more special.”

The Gagliardi Trophy is presented by Jostens and the J-Club of St. John’s University in Minnesota. Nominations for the award were submitted by college presidents, and the J-Club Board of Directors narrowed the candidates down to 10 finalists. A 36-member national selection committee voted on the 10 finalists. Eight of the 10 finalists received at least one first-place vote and more than 20,000 fans cast votes on D3football.com. Williams received the most fan votes and received one additional first-place vote as a result.