October 20, 2020 | by the Office of Marketing and Communications 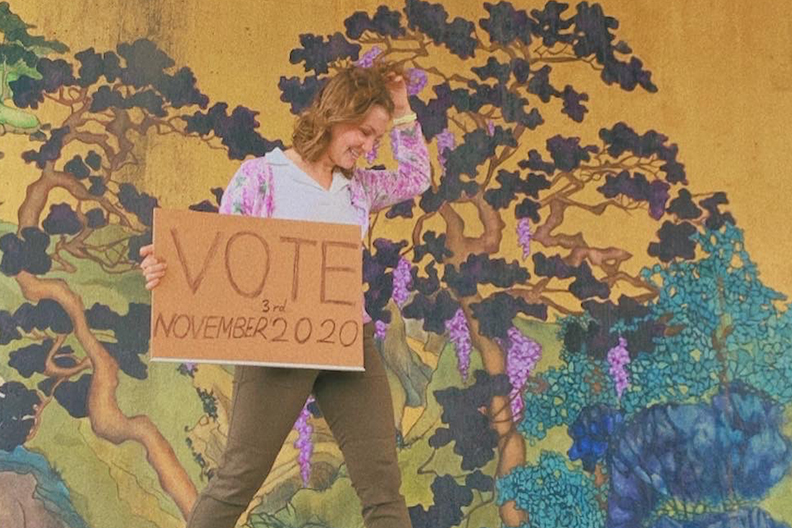 Hannah Bacon ‘22 is not undecided about what she’ll be doing on election night.

Like many other Americans, the junior majoring in political science and environmental studies plans to watch election results while chatting virtually with some of her close friends. She does still have a vote to cast that depends on the final results, however.

Bacon is leading a civic engagement initiative through the Service Learning Program that centers on the election process. The initiative’s primary goals are voter education and informing students how they can participate beyond just casting a vote.

“Anytime you make information more accessible to the public you are empowering others,” she said. “Specifically, with dispersing voter information, federalism tends to make voting much more complicated than it should be. Any clarity around this topic encourages individuals to exercise their rights, the rights that so many were persecuted and died for.”

Bacon has helped students register to vote, organized virtual meetings to discuss how students can get further involved, and explored how students can become election judges—”a great way for our students to fill a need, serve their political system and get paid for it,” said Mary Walsh, director of Service Learning.

“Hannah is one of those amazing people that really tries to make a difference in the world,” said Walsh, who also is a professor and the chair of the Department of Political Science. “She inspires civic engagement among our students by modeling the possibilities and articulating the importance of political participation.”

There is no shortage of participation around this election cycle, according to Bacon. She sees a regular stream of enthusiastic students visiting the voter registration table in the Founders Lounge, and often finds herself deep in conversation with classmates or local residents at events like the #ElmhurstUVotes speaker series. She credits social media for opening the door to more political engagement among younger adults, and points to global environmental activist Greta Thunberg, 17, as an inspirational figure.

Above all else, Bacon detects a real motivation among students to make a difference with their vote.

“There is so much on the line and so many contentious issues that I think students are motivated to make their voice heard,” she said. “Overall, I am optimistic about this generation of young people. We are ready and able to make real changes.”

The civic engagement initiative culminates during election week, with events on Election Day and the two days afterward, in coordination with #ElmhurstUVotes.