January 15, 2016 | by the Office of Marketing and Communications 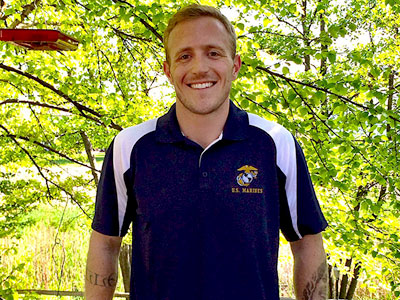 When Andrew Sprauer ’15 enrolled at Elmhurst College in 2011, he wasn’t a typical first-year student right out of high school.

A 25-year-old veteran of the Marine Corps, he had served overseas in both Iraq and Afghanistan.

Fitting in as a college student wasn’t easy, he said, because his military experiences gave him a different outlook from his peers at Elmhurst. “It took a long time to get to where I could relax and open up,” he recalled.

That’s not an unusual challenge for military veterans attending college, according to Jeremy Giacomino, Elmhurst College’s military program coordinator. “By the age of 22 a military veteran may already have traveled around the world and applied what he or she has learned in a variety of stressful settings,” he said. “When a veteran tries to relate to a typical college student, the difference in real-world experiences can result in drastically different perspectives.”

At the same time, Sprauer had no idea what his post-military career would look like, and wasn’t sure how his experiences as a soldier would translate to the civilian workplace.

Staff members at the College’s Center for Professional Excellence (CPE) counseled Sprauer to test the waters through an internship. Initially he dismissed the idea, considering it an experience for younger students “new to the game,” he said. “But then I started thinking, maybe this is something I should be doing.”

Holly Coffin, assistant director for internships, helped Sprauer find an internship at DuPagePads, a Wheaton-based nonprofit dedicated to serving the homeless. Sprauer created marketing materials for the organization’s website, which helped him to improve his writing skills. Working in a collegial office environment boosted his interpersonal skills, too. “It was an incredible way to bridge the gap from school to workforce,” he said.

After the internship, Sprauer prepared for job interviews with support from staff coaches at the CPE. The coaches “taught me how to present and sell myself,” he said, and he refined his resume to the point where “I was proud to submit an application.” Giacomino helped him build a LinkedIn profile, and, Sprauer said, “taught me the value of building my network.”

By the time he attended an Elmhurst College career fair, Sprauer knew what he wanted. His focus led him to the Chicago-based web startup Rivet Radio. “I went right to the Rivet table and asked a lot of questions,” he said. Following up after the career fair, he was told there were no open positions but was invited to visit. The visit turned into a two-hour series of conversations that led to a job offer on the spot. Today, Sprauer works at Rivet as an account executive, selling the company’s online news service to business customers.

Everything had come together for Sprauer by his final semester at Elmhurst, and he was invited to speak at his Commencement ceremony in February 2015. “You don’t have to join the military to understand what it means to serve society,” he told his fellow graduates. “Everyone can make an impact.”