July 2, 2018 | by the Office of Marketing and Communications 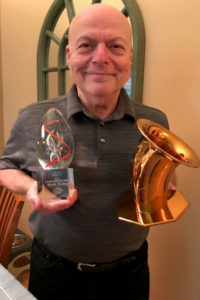 Winners are chosen for their significant, influential career in musical education or performance, and must perform exclusively on a Conn-Selmer brand instrument. Colby has been performing professionally since his teens, and has played and recorded with the likes of Tony Bennett, Wilson Pickett, and the Chicago Symphony Orchestra. He has had a 40-year relationship with the Conn-Selmer company.

Colby joined Elmhurst College in 1998, and serves as the coordinator of jazz combos and as a jazz saxophone instructor.

“The award validates my commitment to music and jazz education,” Colby said. “I have a really good relationship with my students. I think they’ll be proud and happy for me.”

“What Mark is able to accomplish with his students is simply magical,” said Peter Griffin, chair of the music department. “He is able to communicate and share his craft in ways that make our students some of the most accomplished jazz saxophonists anywhere. His professional and life experiences continue to serve as an inspiration to all who come in contact with this incredible musician and human being.”

Colby began playing clarinet at age 8 and switched to saxophone at age 11. Through high school and college, Colby played professionally at private functions and shows in Miami Beach, with such performers as Sammy Davis Jr. and Tony Bennett. In college, Colby started recording with Dr. John, Bill Wyman of the Rolling Stones, Wilson Pickett, and the Bee Gees.

Colby graduated from the University of Miami with a master’s degree in jazz studies. He joined Maynard Ferguson’s band in June 1975 and spent three years touring and recording with the group, with roles as a featured soloist and musical director. Colby then joined Bob James’ band. James signed Colby to Columbia Records, where the saxophonist recorded two solo albums.

In 1980, Colby moved to Chicago and worked as a studio musician recording albums and jingles. During that time, he appeared with Frank Sinatra, Sarah Vaughan, Joe Williams and Jaco Pastorius. Colby also has performed with the Chicago Symphony Orchestra, Milwaukee Symphony Orchestra and Miami Symphony Orchestra. In addition to teaching, Colby continues to play regularly in Chicago clubs, including Jazz Showcase and Catch 35.

Conn-Selmer, Inc., a subsidiary of Steinway Musical Instruments, Inc., manufactures and distributes musical instruments for student, amateur, and professional use.