April 19, 2018 | by the Office of Marketing and Communications 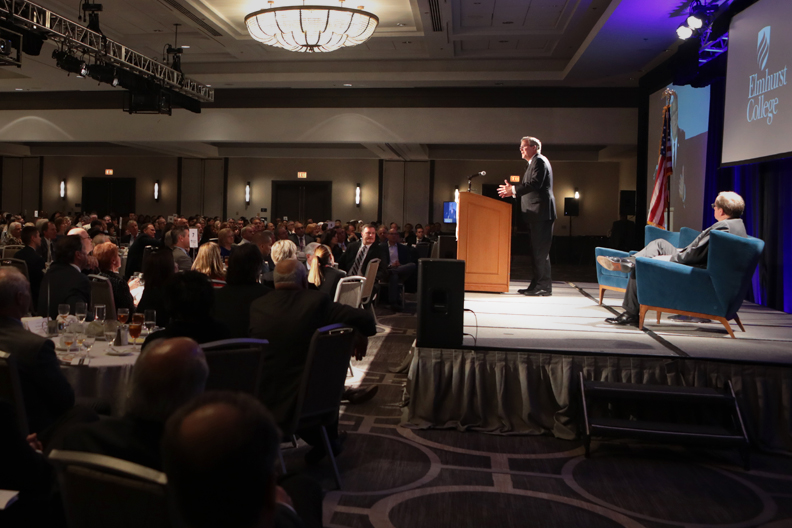 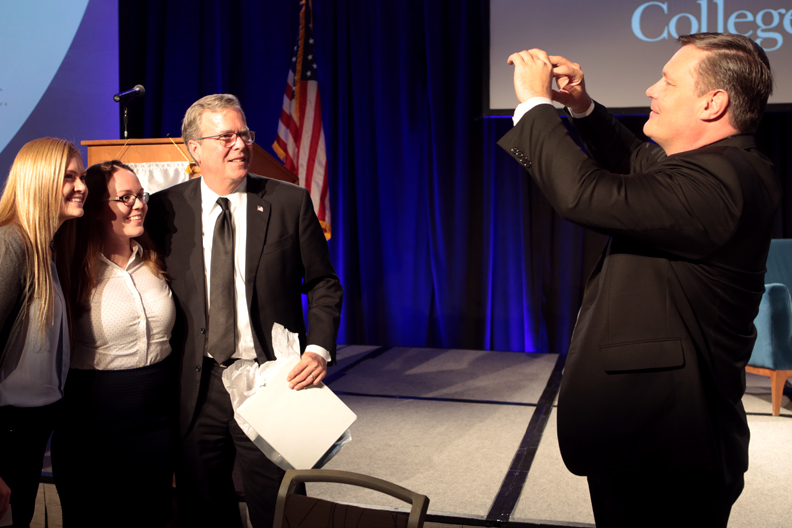 Greeted by a standing ovation from a crowd of more than 800, Gov. Jeb Bush spoke poignantly about the death of his mother, former First Lady Barbara Bush, and discussed a wide range of other topics on Wednesday during the 11th Annual Elmhurst College Governmental Forum.

Barbara Bush passed away the day before, at the age of 92. But her son, the former Florida governor and 2016 Republican presidential candidate, kept his commitment to give the keynote address, “Leadership in a Changing World,” at the Governmental Forum.

“If she were here, she’d say, ‘Thank God, you made it,’ because she would have been very upset if I stayed home. … You commit to something, you’re supposed to show up,” he said.

“We are humbled that you would be here with us today,” he said. “It’s a testament to your family’s strength, characterized so often by your mother, that you would honor this commitment during such a difficult time. America has lost a powerful advocate for literacy and learning, as well as a most distinguished and revered first lady.”

Gov. Bush also described his mother as his first teacher, saying she taught her children to “serve others, be civil and love your family.” 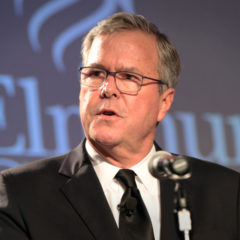 She never stopped teaching. She showed us that it’s easier to do the right thing if it becomes a habit.

Governor Bush on his mother's legacy

Her passing will be especially tough on his father, former President George H.W. Bush. He “held my mom’s hand all day” on her last day, Gov. Bush said. “They supported each other for 75 years— you could be at the dinner table with my parents, and they could be talking to each other without speaking,” he recalled. “Each knew what the other was thinking.”

During his keynote and in a conversation with forum moderator R. Bruce Dold, publisher and editor-in-chief of the Chicago Tribune, Gov. Bush explored a number of topics, from education policy to what he called the country’s “poisonous” political climate.

He said it will be up to citizens to change that political environment, which “has become embedded in our culture.”

“We need a higher standard for people in public life rather than a lower one,” he said. “But politicians don’t see a reward in taking a first step.”

President Donald Trump is unique in his ability to draw “intergalactic attention,” he told Dold. “He was honed in reality TV and knows how to capture the drama of the moment.” But Bush also criticized what he called Trump’s “chaos presidency” of putting forward one policy proposal only to reverse it days later. 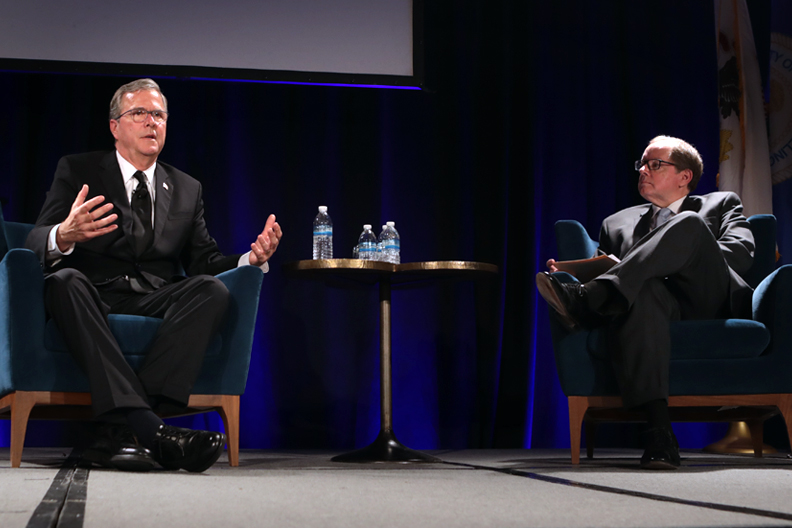 From left: Gov. Jeb Bush and moderator R. Bruce Dold discussed a wide range of topics at the Governmental Forum.

Asked by Dold about the future of the Republican party, Bush said the GOP hasn’t modernized its message. “There’s too much nostalgia,” he said. “Politicians are stuck pursuing systems that worked 30 years ago.”

In response to a question about immigration, asked by an Elmhurst College student, Gov. Bush said it has become a “wedge issue” but needs to be tackled so that “we create a system where the best and brightest can come here.” The Dreamers, undocumented immigrants who were brought to the United States as children, should have a path to citizenship, said Bush, whose wife is Mexican-American.

Reform of the education system is needed to eliminate a growing skills gap, he said. Technology needs to be better harnessed to serve individual student needs and capabilities. “Kids who struggle are being pushed along without mastering the material,” he said.

The Elmhurst College Governmental Forum brings together some of the country’s foremost governmental and civic leaders, business experts and policy analysts to discuss the most important economic and governance issues facing our state and our nation.

Elmhurst College is a leading four-year college that seamlessly blends liberal learning and professional preparation to help students reach their full potential. Elmhurst offers more than 60 undergraduate majors, 15 graduate programs, evening and online programs for adults, and the Elmhurst Learning and Success Academy for young adults with differing abilities. Elmhurst College is one of the Top 12 Colleges in the Midwest, according to U.S. News & World Report; and U.S. News, Money and Forbes magazines consistently rank Elmhurst as one of the Midwest’s best values in higher education.