December 6, 2012 | by the Office of Marketing and Communications 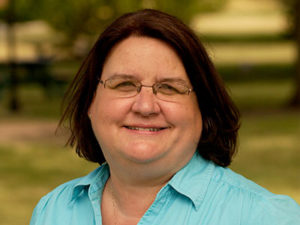 When Kathleen Willis arrives in Springfield in January, her priorities will be to protect funding for education and provide relief for homeowners facing foreclosure, while at the same time being prepared to make the hard decisions needed to address the state’s budget crisis.

The coordinator of access services at Elmhurst College’s library and an alumna of the College, Willis was elected to the Illinois General Assembly on November 6 to represent the state’s 77th legislative district. The district covers parts of western Cook and eastern DuPage counties, including several communities that border O’Hare International Airport. A Democrat and lifelong DuPage County resident, Willis defeated longtime Republican state Rep. Angelo “Skip” Saviano of Elmwood Park.

During her campaign, Willis heard from many residents who are worried about losing their homes to foreclosure. Willis hopes to get homeowners some relief, and to seek more transparency from banks regarding lending practices and ways for homeowners to avoid foreclosure.

One of Willis’ campaign promises was to avoid contributing personally to the state’s budget problems. So she won’t be signing up for the state pension plan. “There’s a lot of concern about the pension system and I believe pension reform needs to start at home,” she says.

“All of us are concerned about how to fix a state budget that’s been out of control for decades,” she adds. “We realize it needs to be fixed, but that it’s not going to be an easy fix. We need to make hard choices.”

A resident of Addison for 40 years, Willis long has been interested in education issues, starting from when her children, now grown, first started attending school. She is serving her third term on the Addison Elementary District 4 School Board. As a member of the American Association of University Women, or AAUW, she has been one of the organizers of the annual Dare to Dream program, held at Elmhurst College. Dare to Dream mentors Hispanic middle school and high school girls and their mothers, and promotes the benefits of staying in school and pursuing higher education.

In Springfield, Willis will seek assignments to education-related committees. “I want to make sure no aspect of education gets more cuts,” she says. “Education is where my knowledge about governing comes from, and that’s where my passion is too.”

Willis has worked for Elmhurst College since 1994. Besides her role as access services coordinator at the A.C. Buehler Library, she teaches children’s and youth literature at the College. She received a bachelor’s degree in human service administration from Elmhurst in 2000 and a master’s degree in library and information services from the University of Illinois at Urbana-Champaign.

As a full time legislator, Willis will leave the College in January. Her inauguration to the legislature will be on January 9.

“I’m really looking forward to impacting the community at a higher level,” she says. “This is my chance to take my grassroots experience and make even more of a difference.”