December 6, 2019 | by the Office of Marketing and Communications 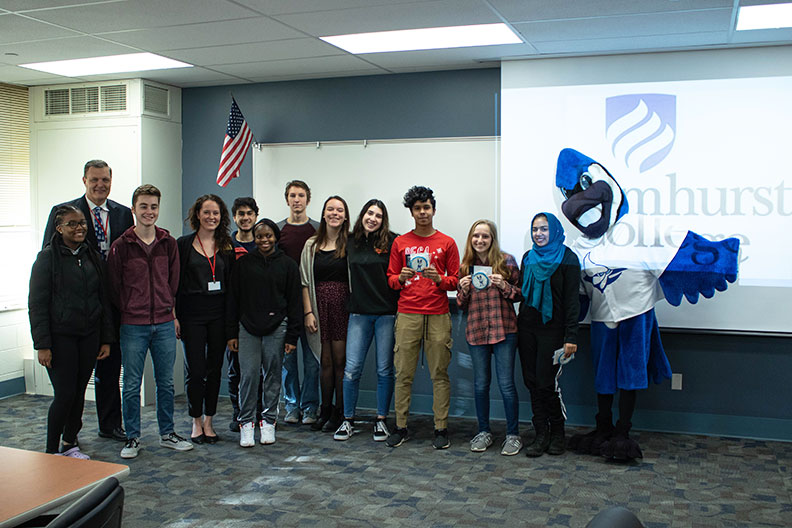 Elmhurst College President Troy D. VanAken hit the road on Wednesday, Dec. 4, to congratulate more than a dozen seniors at Willowbrook High School who had just been accepted to Elmhurst College.

The seniors were called out of class to attend a surprise reception in Willowbrook’s “Warrior Room,” where several parents and Principal Daniel Krause joined them. President VanAken and the school’s mascot, Victor E. Bluejay, greeted each student and welcomed them into the Elmhurst Bluejay community.

You’ve accomplished so much already and have a lot to be proud of—when you get to Elmhurst, you’ll find even more opportunities to reach your full potential,” President VanAken said. “Congratulations on being accepted to Elmhurst—we’re really looking forward to seeing you on campus.”

Earlier in the week, each student received a “Bluejay Box” in the mail that contained a letter of acceptance, a scholarship offer, an Elmhurst cap and more. The Willowbrook students were awarded a combined $220,000 a year in scholarships and grants, President VanAken said.

At two other Chicago-area high schools this week, Vice President for Admission Timothy Ricordati and other members of the Admission team personally welcomed another 60 newly admitted Elmhurst students.

Willowbrook senior LeTavia Hill was excited to be admitted and said Elmhurst was her first choice because it’s close to her home and she is impressed with the nursing program. “I also know I want to go to a smaller school so I can make better connections,” she said.

Mikayla Tomaszewski, whose father is an alumnus, plans to play softball at Elmhurst and may major in environmental studies. She said Elmhurst also was her first choice, because “the attention paid to the students is better, and the quality of the education is unmatched.”

“I’m really excited to meet new people and get involved in all the different things Elmhurst has to offer,” she said. “I feel like my four years there are going to be the best time of my life.”