December 20, 2019 | by the Office of Marketing and Communications 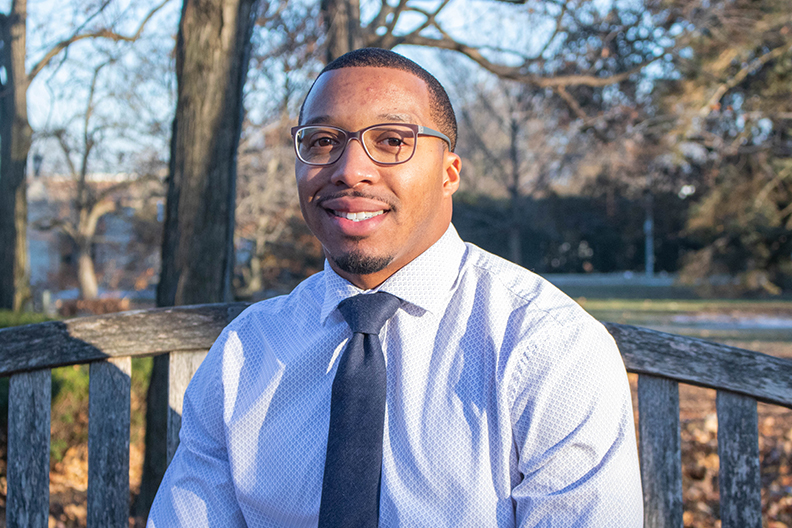 Elmhurst College alumnus Scottie Williams Jr., who brought national distinction to the College in 2012 as a football All-American, has returned to his alma mater to become the director of alumni engagement.

“We’re delighted to welcome back an alumnus who left such an impressive legacy here, and who has shown continued passion for his alma mater,” said Elmhurst College President Troy D. VanAken. “As we approach our 150th anniversary in just a couple of years, Scottie will head up the cheering section celebrating our alumni.”

A 2013 Elmhurst graduate, Williams began his new role on Dec. 9. “I’m excited to be back, and I’ve loved reconnecting with alumni, meeting current students, and feeling the energy of being on campus again,” he said. “I have great memories of my time here as a student, and I’m eager to hear from other alumni and help us become even closer as a community.”

In 2012, Williams was the first Elmhurst player to earn the prestigious Gagliardi Trophy, given to the most outstanding football player in NCAA Division III. The award, which honors excellence in athletics, academics and community service, reflects Williams’ career at Elmhurst. He twice earned Academic All-Conference honors and was a first-team Capital One Academic All-American. Off the field, he helped build homes as part of the College’s Habitat for Humanity chapter and helped raise funds for a variety of causes.

After graduating with a marketing degree, Williams worked in sales and as an executive search consultant and recruiting manager before deciding to return to Elmhurst. “I believe in our mission, and will engage our alumni around the idea that we all have a stake in helping Elmhurst College continue to succeed,” he said. “This is my chance to give back to a community that is very important to me.”