November 14, 2016 | by the Office of Marketing and Communications 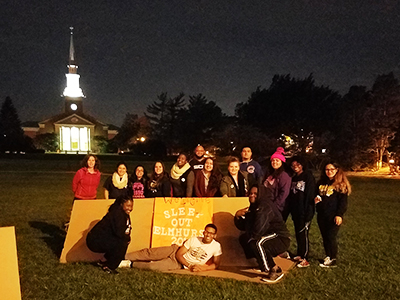 The Elmhurst students pondered their choices: Pay out of pocket for a root canal or try to mask the toothache with over-the-counter medication?

Offer to repair the fender you dented or drive off? Make some desperately needed cash by helping a friend move, or go see your child perform in a school play?

One after another, they eventually hit “rock bottom” in their quest to avoid homelessness, but realized how fortunate they were to be playing a simulation game on their cell phones rather than being forced to make those choices in real life. And although they slept in cardboard shelters that night, they did so on the beautiful Elmhurst College mall, in some cases only yards from their cozy residence halls.

About 15 students took part in the College’s first Sleep Out Saturday on October 15, and gained a greater understanding of the many causes and effects of homelessness in DuPage County, where nearly 73,000 people—7.9 percent of the population—live in poverty. Brianna Bravo, a junior majoring in psychology, wanted the experience to raise awareness on a campus where students rarely see evidence of homelessness.

“Having the opportunity to say, ‘I slept out one night and I sacrificed’ takes it from sympathy to empathy,” said Simone Salter ’19, an interdisciplinary communication major who organized the event in coordination with Bridge Communities, a non-profit organization that provides transitional housing, financial counseling and other support services for DuPage residents

Sharing her personal experience, Salter described how her family’s comfortable home life was quickly upended after her father was laid off from his job, then diagnosed with lung cancer. He learned it was a misdiagnosis only after medical costs had overwhelmed the family’s savings and dragged them into debt.

The Salters moved into a friend’s basement apartment, then tried to stay afloat in rentals while working minimum wage jobs. Then they turned to Bridge Communities for help.

“There are many families who have been through what my family has gone through,” Salter said. “We never know how close this hits.”

“It is a huge issue in DuPage County,” agreed College Chaplain H. Scott Matheney, who joined the students in sleeping out. “Students need to be involved in the issues of the day.”