September 25, 2012 | by the Office of Marketing and Communications 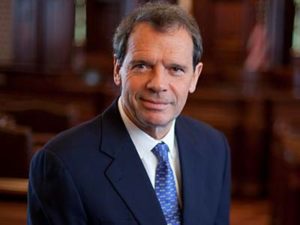 Illinois Senate President John Cullerton has been a member of the state’s General Assembly for more than 30 years, serving as president since 2009.

Shortly after his inauguration as Senate president in January of 2009, Cullerton’s immediate challenge was to manage the historic impeachment trial of then-Illinois Governor Rod Blagojevich. Cullerton worked to research and negotiate the rules of the trial that ultimately led to Blagojevich’s removal from office.

As a lawmaker, Cullerton has placed a priority on vehicle safety issues. He passed the state’s Child Passenger Safety Act, and has pushed for tougher licensing requirements for young drivers, to ensure safer Illinois roads.

In dealing with the state’s ongoing fiscal crisis, Cullerton says a large part of the solution must include bringing opposing voices together. During his inaugural address he said, “The atmosphere here has deteriorated and we have lost a sense of camaraderie that we can—and must—restore.”

Democracy and the Upcoming Elections will begin at noon on Tuesday, October 2, in the Founders Lounge of the Frick Center. The event is free and open to the public.