Student-Veterans See Their Future in Nursing

November 11, 2019 | by the Office of Marketing and Communications 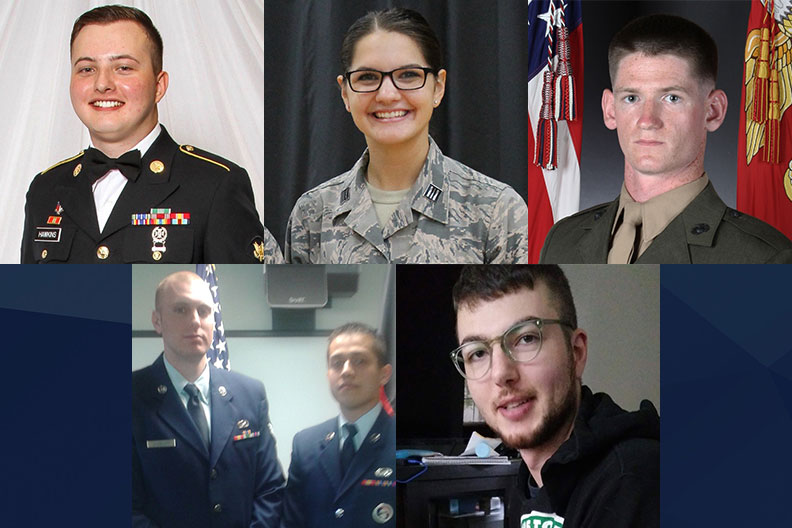 While Andrew Hawkins ’21 was serving as a combat medic in the Army, he was impressed by the head nurse of the clinic where he worked, and decided to go into nursing when his tour was up.

“The way she cared for her patients, and went above and beyond, was inspiring to me,” says  Hawkins, who was stationed at Tripler Army Medical Center in Hawaii and Camp Stanley in South Korea from 2013 to 2017. “Someday I would like to be working as a nurse in an ER or ICU, or possibly going back to active duty as an Army nurse.”

Hawkins is one of five veterans and one ROTC cadet currently majoring in nursing at Elmhurst. All are juniors and seniors, and make up the largest number of military-affiliated students the nursing program has seen in at least 15 years, says Laura Brennan, director of the undergraduate pre-licensure nursing program and an assistant professor of nursing.

The students represent the Army, Air Force, Navy and Marines and have served all over the world, in roles ranging from fighting on the front lines to fixing jet computers to training rescue swimmers.

Despite their diverse military backgrounds, all were drawn to nursing.

“I was always interested in finding a way to connect with people and aid them in their time in need,” says David Garcia ’21, a former Air Force staff sergeant who managed the logistics of deploying personnel. “That motivated me in the military and still does now.”

Former Marine Sgt. Michael Wood ’21, who served in the 2nd Light Armored Reconnaissance Battalion, originally intended to pursue a degree in civil engineering. He switched to nursing after taking a biology class at Harper College and becoming interested in the subject. “Nursing seemed like a field where I could explore this new interest while getting a degree in one of the fastest-growing job markets in the country,” he says.

The student-veterans’ experiences in the military have equipped them with skills that will transfer well to nursing, Brennan says. “The vets display such leadership and teamwork. They have a strong worth ethic. Plus they can adapt to stress and to change, great attributes to have as a nurse.”

“In the military, I learned how to keep at a job until it is finished, even when it appears to be an impossible task,” says Gregory Rundle ’20, an Air Force veteran who served in Qatar and Afghanistan. “Blood, sweat and tears can solve almost anything.”

After getting his nursing degree, Garcia says he would like to work in a trauma unit, and hopes one day to get involved in humanitarian work. Going back to military service also has crossed his mind. “Let’s see where God and life will take me,” he says, “but for now, I am proud to be in the nursing program.”

Unlike the nursing students who’ve already served in the armed forces, Air Force ROTC Cadet Elise Jakubowski ’21 is eager to begin her military career after graduating from Elmhurst. “Ever since I was a little girl I’ve felt called to be a nurse, and I am pursuing military nursing so that I can serve our men and women in uniform and give them the best medical care possible,” says Jakubowski, who is Squadron One commander for the Air Force ROTC. “I hope to focus on medical-surgical nursing, and gain experience wherever the military needs me most.”