March 30, 2020 | by the Office of Marketing and Communications 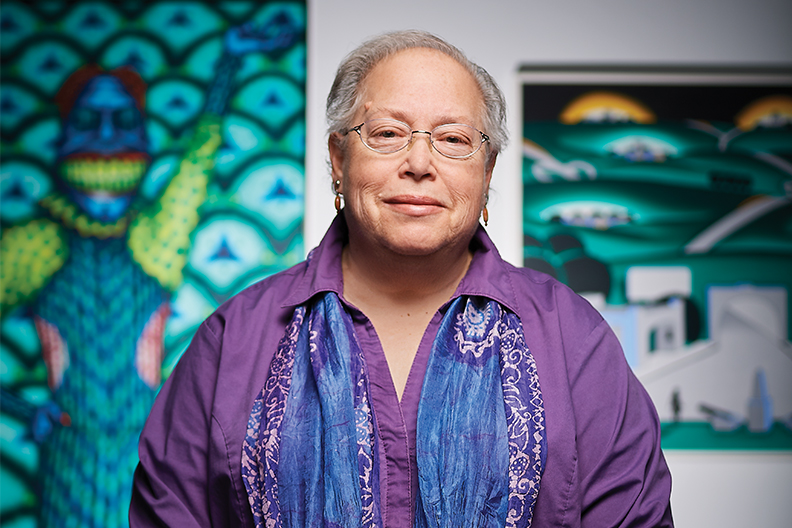 Suellen Rocca was a trailblazing artist, a longtime educator in the Elmhurst College art department, and a passionate advocate for the College’s art collection who shared its works with museums and galleries across the country and around the world. Rocca died on March 26 at the age of 76.

As curator and director of exhibitions at Elmhurst College since 2006, Rocca oversaw the College’s collection of Chicago Imagist and Abstractionist Art. The collection has enjoyed greater visibility and critical notice recently, largely due to Rocca’s efforts. In just the past few years, paintings from the collection have traveled to New York City, Sao Paolo, Milan, London, Glasgow and other cities.

The collection includes several works by Rocca and other members of the Hairy Who, a visionary artists group formed in Chicago in 1966 and known for their vibrant, graphic, gleefully insubordinate and often weirdly humorous works. In 2018, the Art Institute of Chicago honored the group with a retrospective exhibition of their work, which Rocca described as the achievement of a lifetime.

But “teaching from the collection,” and insisting that the art remain accessible to Elmhurst College students, was always a priority for Rocca. One of her first major roles at the College was to painstakingly reinstall the art collection on the walls of the A.C. Buehler Library after it had undergone an extensive renovation in the early 2000s.

“She really made sense of the art programmatically so that she could then conduct tours and teach out of it—she had an intellectual reason for everything,” recalled Susan Swords Steffen, retired director of the library.

“Suellen was as excited to share the collection with our students as she was with the most acclaimed galleries in Europe,” said President Troy D. VanAken. “We will greatly miss her expertise and dedication to one of Elmhurst College’s most distinctive features.”

Rocca taught in the art department at the College for many years, and was a mentor to generations of students through critiques and discussion, said Mary Lou Stewart, an art professor and former department chair at the College. “Suellen took the creating of art very seriously, and she was always eager to talk to students and alumni about their work,” she said.

Rocca also was active in the local community. As a member of the City of Elmhurst’s Public Arts Commission, she contributed her insight and expertise on public art awareness and beautification efforts for the city.

She also has collaborated frequently with the Elmhurst Art Museum, most recently on an exhibition featuring artist and former Elmhurst College Curator Sandra Jorgensen. In 2018, the art museum recognized Rocca for her outstanding service as an artist, curator and educator in the western suburbs.

In his remarks, Executive Director John McKinnon said: “Many artists exhibit their work, few exhibit their work internationally, and even rarer still are those that get critical attention by experts from the top curators, museums, galleries and critics around the world. Suellen is a part of that very small, very select group that has been entered into history books.”

In 2016, Rocca returned to the School of the Art Institute of Chicago, where she earned her bachelor’s degree in 1964, to accept an honorary doctorate of fine art.

Private funeral services for Rocca are scheduled to take place on April 3. At a later date, Elmhurst College will hold a memorial on campus to celebrate Rocca’s many contributions to the College and its students.