September 13, 2021 | by the Office of Marketing and Communications 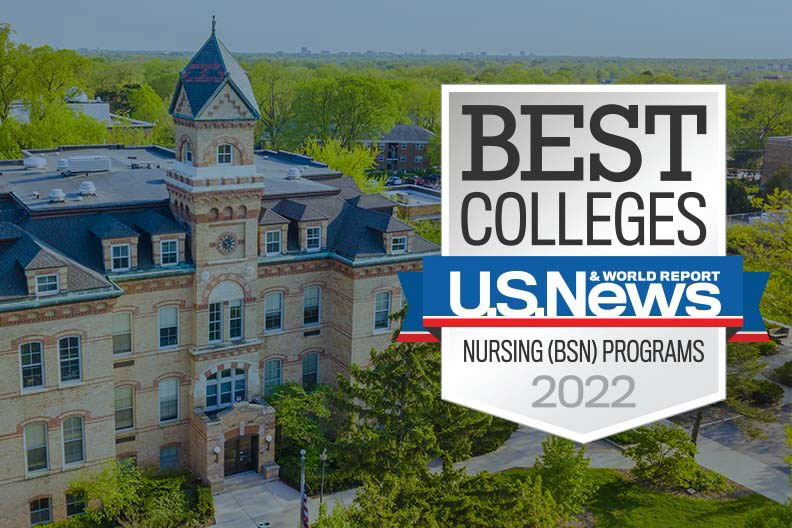 Elmhurst University’s undergraduate nursing program ranks among the best in the nation, according to the latest rankings by U.S. News & World Report.

Published on Sept. 13, U.S. News & World Report’s Best Colleges for 2022 announced its first-ever rankings of bachelor of science in nursing (BSN) programs. Of 694 top nursing programs across the country, Elmhurst’s ranks 288th, with the very top spots occupied by far larger, research-based institutions such as the University of Pennsylvania, Duke University, University of North Carolina at Chapel Hill and University of Michigan at Ann Arbor. Among Illinois schools, Elmhurst ranks sixth. The rankings are based on the judgments of deans and senior faculty members of nursing schools and departments, and institutions around the country.

“For a smaller nursing program to be in the top 40 percent nationwide, and ranked sixth in the state of Illinois with large and well-known programs, speaks to the quality of the nursing programs at Elmhurst University,” said Diane Salvador, executive director of the department of nursing and health sciences. “As we maintain our focus on student-centeredness, academic rigor and high-quality faculty, we look forward to continued success for the program and our students.”

Elmhurst rose several spots this year in the Best Value Schools category, from 23rd to 17th among universities in the Midwest region. To determine which colleges and universities offer the best value for students, U.S. News factors academic quality and cost after accounting for total expenses and financial aid.

In addition to U.S. News, recent reports by organizations such as Princeton Review continue to name Elmhurst as one of the best colleges or universities in the Midwest for educational value, student experience and a variety of other factors.

Elmhurst University President Troy D. VanAken said, “I’m very pleased that our undergraduate and graduate nursing programs are getting some richly deserved recognition, and that as an institution, Elmhurst continues to shine in the areas that we take great pride in, including the quality of our undergraduate teaching and the educational value we offer our students.”