July 6, 2021 | by the Office of Marketing and Communications 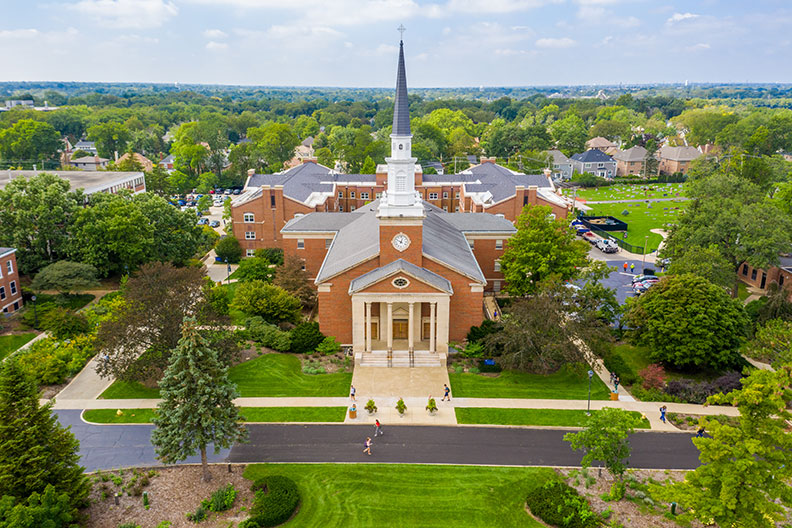 July 8, 2021, marks the 55th anniversary of when the Rev. Dr. Martin Luther King Jr. spoke in Hammerschmidt Memorial Chapel in 1966, during the Chicago Freedom Movement.

To honor that historic event, as Elmhurst University celebrates its sesquicentennial anniversary this year, the University will premiere the video “Elmhurst at 150 and a Stone of Hope: Reflections on Martin Luther King Jr. at the Chapel on July 8, 1966,” at 7:00 p.m. CST on Thursday, July 8.

The presentation features the Rev. Dr. Kelly Brown Douglas, an Episcopal priest, theology professor, and dean of the Episcopal Divinity School and the Bill and Judith Moyers Chair in Theology at Union Theological Seminary in New York City.

The video explores the lasting significance of Dr. King’s appearance at Elmhurst in 1966, “to help our community remember these historical moments—the 55th anniversary during our 150th—as we reflect on what we are doing today and into the future,” said Elmhurst University Chaplain H. Scott Matheney. The video also includes messages from Trustee and alumnus L. Bernard Jakes ’97 and Elmhurst University President Troy D. VanAken.

Dr. King moved to Chicago in 1966 to join the Chicago Freedom Movement, a campaign that expanded civil rights activities from the South to northern cities. He spoke before more than 1,000 people in Hammerschmidt Memorial Chapel on July 8 as part of a whirlwind tour in the Chicago area to promote a civil rights rally at Soldier Field a few days later.

“During this 150th anniversary year for Elmhurst University, we will honor Dr. King’s legacy by living up to our commitment to build a more diverse, equitable and inclusive campus and world,” President VanAken said. “In this way, we will uphold the dream and will continue to make Elmhurst University a community of learning, service and distinction.”