November 12, 2012 | by the Office of Marketing and Communications 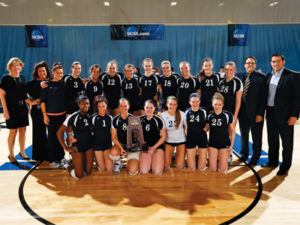 The Elmhurst volleyball team punched its ticket to the NCAA quarterfinals on November 11 with a 25-19, 25-19, 25-22 victory over third-ranked Washington University in the championship match of the NCAA Midwest Regional.

The Bluejays will face Salisbury University in the NCAA Championship quarterfinals at 2:00 p.m. (CST) on Thursday, November 15. The Championship games will take place from November 15-17 in the DeVos Fieldhouse at Hope College, in Holland, Michigan.

“I am so proud of this team,” said Head Coach Julie Hall. “They came prepared to play and really stepped up.”

The win marks the Bluejays farthest advancement in the NCAA Tournament under Hall’s direction.

In the opening set, the two teams traded points to a 6-6 tie before Washington crept ahead 12-9. Elmhurst answered back with an 8-4 run to even the set at 17-17. A kill from Antonéya Veasy Smith and an ace from Erin Thill put the Bluejays on top 19-17 forcing Washington to burn a timeout. After Washington pulled to within a point at 19-18, the Bluejays rattled off three straight points off of two kills from Veasy Smith and an ace from Hannah Lessen. Washington pulled to within three points at 22-19, but Elmhurst scored the final three points to take the first set 25-19.

The second set started in similar fashion to the opening set. With the score tied at six, Elmhurst opened up a two -point lead on a kill from Sam Szarmach and a Washington error. After a timeout from the Bears, the Bluejays used a 4-0 run keyed by a pair of aces from Lessen to take a 16-10 lead. The Bluejays built an eight-point cushion at 21-13 and pulled away from the 25-19 win.

Elmhurst hit .327 as a team, finishing with 47 kills and committing only 10 errors in the match. Washington totaled 42 kills and 12 errors. The Bluejays picked up nine points off of service aces.

Reynolds led Elmhurst with 11 kills and a pair of blocks in the win, earning Tournament MVP honors in the process. Wilks and Szarmach joined her on the all-tournament team. Wilks totaled eight kills and two blocks while Szarmach finished with eight kills and 12 digs. Veasy Smith and Novak totaled seven kills apiece for the Bluejays. Thill finished with a team-leading 22 assists while Katie Reuffer added 16. Hannah Lessen added a team-leading 18 digs.

“We really played well together as a team,” said Wilks. “This was one of our best performances of the year, but I believe we can still play better.”