March 11, 2022 | by the Office of Marketing and Communications 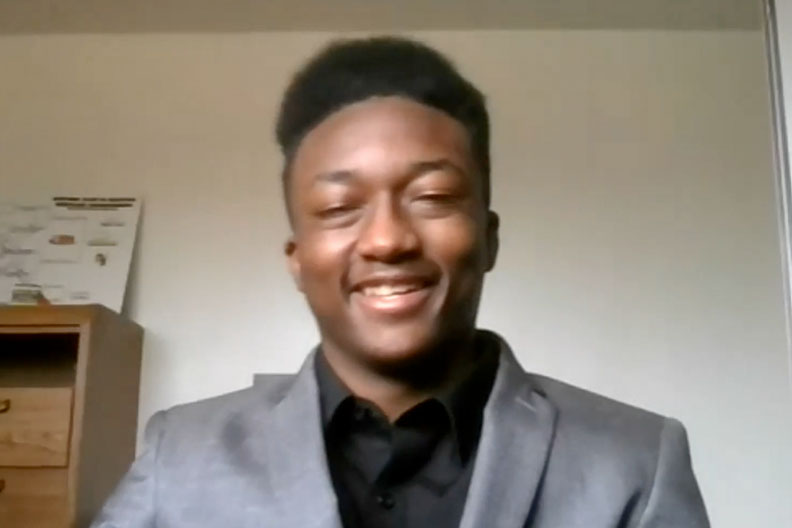 Most weekends, Zachary Carter keeps his look casual—tank tops, work shirts, etc. But on Saturday, March 5, Carter’s father urged him to “look presentable” for the final round of Elmhurst University’s fourth annual Niebuhr Service to Society Scholarship Competition. So even though the event was held remotely this year, Carter put on a suit for the occasion.

Good call. At the awards ceremony later that morning, when the first-place winner was revealed, Carter’s video camera came on at the precise moment he realized that he had just won a four-year, full-tuition scholarship to attend Elmhurst in the fall.

“I was like, this is crazy! I was in disbelief,” said Carter, who lives in Chicago and is a senior at Lindblom Math and Science Academy. His father, watching from another room, shouted in excitement at the news.

This year, a record 200 students entered the scholarship competition, which celebrates students with a passion for service to their communities and the world. Applicants were asked to submit a video about how they contributed to positive change within their community. The participants, all admitted Elmhurst students, hailed domestically from across the Midwest and as far west as California; and globally, from Greece, Ghana, Nigeria, Brazil, India, Colombia, Kenya and El Salvador.

Elmhurst University launched the Niebuhr Service to Society Scholarship Competition in 2019 to recognize and reward prospective Elmhurst students with a significant interest in service, both as an element of their college search and in their wider ambitions.

In his video, Carter described his experiences as a boxer, volunteer coach and youth mentor at Ring of Hope, a community center in Chicago’s Grand Crossing neighborhood that uses boxing to promote anti-violence. “It’s very fulfilling to inspire young kids who might not have any inspiration otherwise,” he said. “I’m looking not just to make an impact on my sport, but to make an impact on my community.”

Carter, who plans to major in finance and join the wrestling team at Elmhurst, says he’s been preparing to attend college since elementary school. Besides his father, his grandparents have been his biggest supporters, he said, and they were “ecstatic” to hear he’d won the Niebuhr competition. Carter plans to use his degree and experience to create an organization to fight poverty and violence in Chicago.

“For me and my whole family, this scholarship is a blessing for real,” he said.

Roohana Amin, a senior at Addison Trail High School, is the second-prize winner of the competition. She was awarded a stipend to cover four years of room and board at Elmhurst.

Winners of the virtual group service project, which took place earlier in the day on March 5, included:

They each received a $3,000 Niebuhr Service to Society Group Award. All students who entered the competition and attended the scholarship event received a $1,000 Niebuhr Grant, which can be added to previously awarded merit scholarships and/or grants.

The Niebuhr Service to Society Scholarship Competition is named for theologians Reinhold and H. Richard Niebuhr, two of Elmhurst University’s most esteemed alumni. The Niebuhrs’ commitment to scholarship, service and social justice informs the University’s mission. Elmhurst seeks students motivated to transform their communities in line with the teachings of the Niebuhr brothers.