June 16, 2021 | by the Office of Marketing and Communications 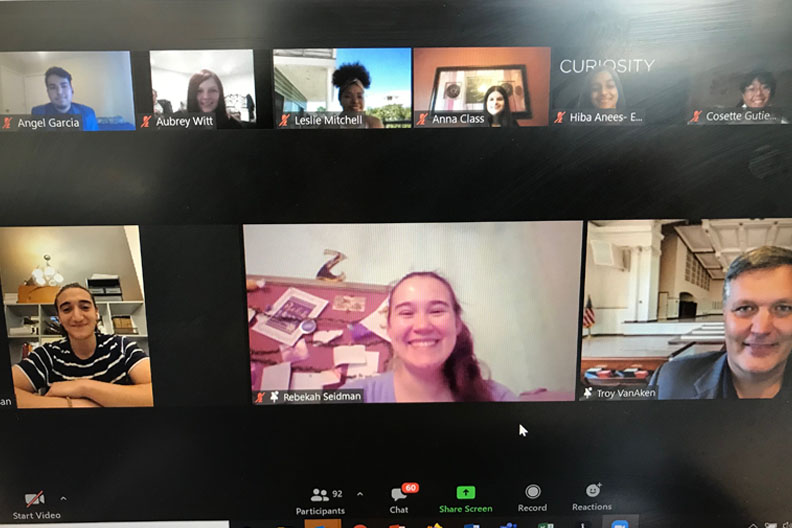 Two transfer students with a deep love of learning have been named the first-place winners of the 2021 Elmhurst University Intellectual Curiosity Scholarship Competition.

During an awards ceremony on June 2, Karam Hasan, who lives in Palos Hills, Ill., and is a transfer student from Moraine Valley Community College; and Rebekah Seidman, who is transferring from Valparaiso University and lives in Inverness, Ill., each were awarded a $5,000 renewable scholarship for up to two years of study at Elmhurst University.

The University launched the Intellectual Curiosity Scholarship Competition in 2020 to support the enrollment of transfer students with a natural propensity toward curiosity.

All admitted transfer students with a cumulative grade-point average of 3.25 or above were invited to participate in the competition. Applicants were asked to write an essay about how their curiosity drives them and where it might take them, at Elmhurst University and beyond.

During the next round of the competition, which took place virtually on June 2, participants heard an inspirational keynote by Anu Mahajan, president and co-founder of TinkRworks, LLC, a K-8 STEAM-education provider. The participants also formed teams to compete in an Academic Bowl, answering challenging questions from Elmhurst’s Integrated Curriculum. Elmhurst University President Troy D. VanAken then presided over the awards ceremony.

Each member of the winning Academic Bowl group was awarded a $2,000 renewable scholarship for up to two years of study. The winning team included:

All students who submitted essays and participated in the June 2 round of the competition received a $500 renewable scholarship for up to two years of study.

Karam Hasan’s winning essay drew inspiration from his father, who wasn’t able to complete his education but who encouraged his children “to become individuals that are intellectually curious and driven to find the answers to any unanswered questions.”

“As long as you are breathing and walking on this Earth, keep learning, keep asking and keep being a student,” Hasan’s father told him.

In her winning essay, Seidman said she is looking forward to taking classes at Elmhurst, including a Digital Storytelling class that she said would “bring my curiosity to life.” She was eager to learn more about writing, drawing, designing, filmmaking and creating. “My love for learning almost overwhelms me at times,” she wrote. “It feels like I want to know everything about everything, but I don’t even know the full scope of what I don’t know, and each new class is an adventure in broadening that scope.”