March 5, 2021 | by the Office of Marketing and Communications 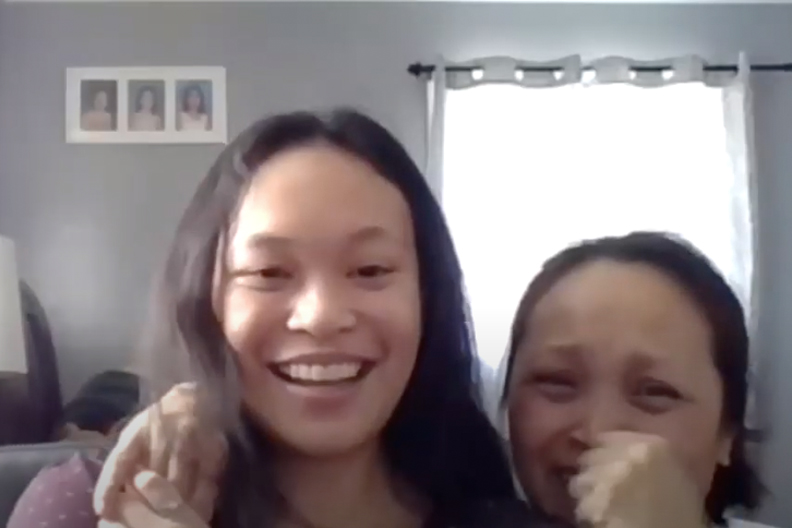 Erin Dela Cruz and her Mom during the Niebuhr Service to Society Competition awards ceremony.

Erin Dela Cruz, who has been working to fight poverty in her parents’ hometowns in the Philippines, is the first-place winner of Elmhurst University’s third annual Niebuhr Service to Society Scholarship Competition.

During an awards ceremony on Saturday, Feb. 27, Dela Cruz, who lives in Arlington Heights and is a senior at Saint Viator High School, was awarded a four-year, full-tuition scholarship to attend Elmhurst.

The University launched the Niebuhr Service to Society Scholarship Competition in 2019 to recognize and reward prospective Elmhurst students with a significant interest in service, both as an element of their college search and in their wider ambitions.

In her video submission, Dela Cruz described regularly saving up money to buy school supplies, toiletries and other items to take to the impoverished towns in the Philippines where her parents grew up. This past spring, she and her family raised money to buy large quantities of rice to distribute in those communities.

Dela Cruz, who plans to major in nursing at Elmhurst, says she was “shocked and had tears of joy” when she was named this year’s winner of the full-tuition Niebuhr scholarship.

“This means a lot to me,” she said. “It brings relief that my parents don’t have to worry about paying those bills every month. We can focus our efforts on sending money to the Philippines to buy more rice for the people. Our new goal is to extend it to more families than we had last year.”

Lucia Gaviria, a senior at the Columbus School in El Retiro, Antioquia, Colombia, is the second-prize winner of the competition. She was awarded a stipend to cover four years of room and board at Elmhurst.

Students who entered the competition and attended the scholarship event received a $1,000 Niebuhr Grant, which can be added to previously awarded merit scholarships and/or grants. The contest drew 173 applicants, and 150 students attended the Feb. 27 event.

“You are here because you are motivated by the desire to make a difference in your community and in the lives of others,” President Troy D. VanAken said to the students during the awards ceremony. “You inspire us with all of the ways you serve society. My hope is that Elmhurst University has inspired you.”

The Niebuhr Service to Society Scholarship Competition is named for theologians Reinhold and H. Richard Niebuhr, two of Elmhurst University’s most esteemed alumni. The Niebuhrs’ commitment to scholarship, service and social justice informs the University’s mission. Elmhurst seeks students motivated to transform their communities in line with the teachings of the Niebuhr brothers.