March 5, 2020 | by the Office of Marketing and Communications 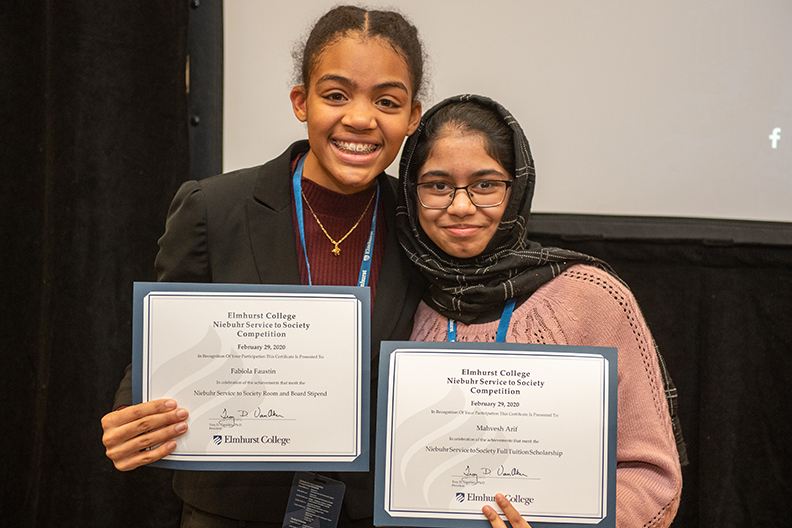 Mahvesh Arif, who helped build an elementary school near her grandfather’s farm in rural India, is the first-place winner of the second annual Niebuhr Service to Society Scholarship Competition.

During an awards ceremony on Saturday, Feb. 29, Arif, who lives in Lombard and is a senior at Glenbard South High School, was awarded a four-year, full-tuition scholarship to attend Elmhurst.

The College launched the Niebuhr Service to Society Scholarship Competition to recognize and reward prospective Elmhurst students with a significant interest in service, both as an element of their college search and their wider ambitions.

In her video submission, Arif described how she visited her family’s farm in central India, near Hyderabad, and learned there was no school to serve children who helped their families in the rice farms. Arif worked with her dad and others in the Indian community to convert a half-built structure into a school. They installed carpeting, bookshelves and plumbing. It took two years, but the school now serves 20 students. They attend three days a week for four hours, providing an education “that would build them a brighter future,” Arif says in the video. “This is just a small step in increasing literacy around the world.”

Fabiola Faustin, a senior at Frank C. Bunnell High School in Stratford, Conn., is the second prize winner of the competition. She was awarded a stipend to cover four years of room and board at Elmhurst.

Winners of a group service project at the scholarship event were Priscella DelValle, Clavin Greene, Stefani Paladino, Kathleen Ryndak, Saaniyah Sajed and Faith Wyant. They each received a $1,500 Niebuhr Group Project Grant. Students who entered the competition with a video and detailed service resume and who attended the scholarship event receive a $1,000 Niebuhr grant, which can be added to previously awarded merit scholarships and/or grants. The contest drew 155 applicants, and 112 students attended the Feb. 29 event.

The Niebuhr Service to Society Scholarship Competition is named for theologians Reinhold and H. Richard Niebuhr, two of Elmhurst College’s most esteemed alumni. The Niebuhrs’ commitment to scholarship, service and social justice informs the College’s mission. Elmhurst seeks students motivated to transform their communities in line with the teachings of the Niebuhr brothers.

“You are here because you are motivated by the desire to make a difference in your community and in the lives of others,” President Troy D. VanAken said during the awards ceremony. “We too believe in changing lives, through the power of education. Should you choose to attend Elmhurst College, you will be in the kind of environment that will prepare and inspire you to do even more that you can share with the world.”