April 14, 2022 | by the Office of Marketing and Communications 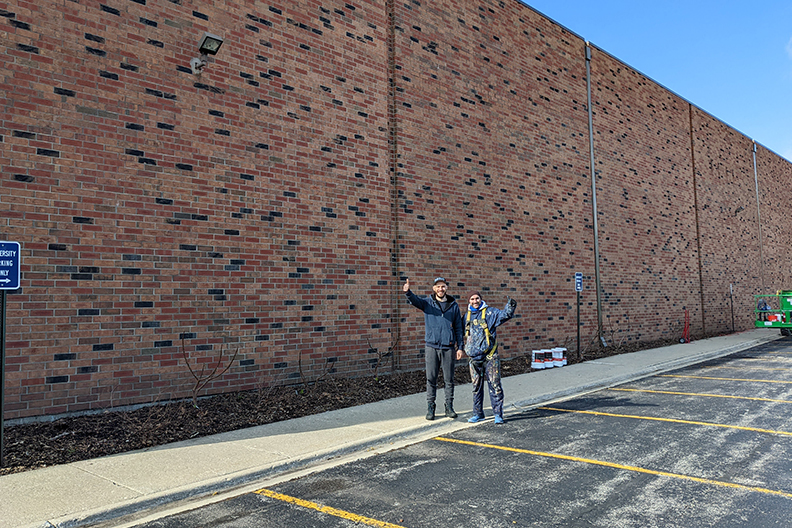 Two Elmhurst University faculty members have begun to transform a long brick wall on the north end of campus into a vibrant outdoor mural that will capture the spirit of the University’s sesquicentennial celebrations for years to come.

The mural—”Be Bold. Be Elmhurst.”—will be located on a north-facing wall of the R.A. Faganel Hall athletic facility, on Park Avenue. While located on campus, the mural will face outward, serving as public art that the artists, who began painting on April 14, hope will connect the campus and the Elmhurst community in a way that will inspire its viewers and add to the city’s visual landscape.

The creators are Elmhurst University art faculty Rafael Blanco and Andrew Sobol. Blanco is a professional muralist who has painted award-winning, large-scale public art murals in Nevada, Indiana, Colorado, Maryland, California and throughout Illinois. Sobol is chair of the Elmhurst University art department, a graphic designer and creative director whose wide-ranging projects include branding, marketing design and web application development. Both artists are donating their time to paint the mural.

Blanco and Sobol have been working on the project for the past two years—they first came up with the idea as a way to contribute to the University’s 150th anniversary celebrations, which began in 2021. The artists consulted frequently with the City of Elmhurst and the City’s Public Arts Commission to make sure their proposed designs would comply with the City’s mural ordinance, which bars murals from containing logos, slogans or other messages that could be viewed as advertising.

Last month, Elmhurst University students, faculty and staff were invited to cast their votes among four designs and select the mural that would be painted. More than 775 votes were cast, and “Be Bold. Be Elmhurst.” received more than half.

­­­­In developing that design, the artists wanted it “to unify the university and community, to inspire and make a positive impact,” Blanco said. The portrait in the design—a face, painted in and emerging from bright colors—is intentionally ambiguous, “so that we could celebrate and include as many people as we could,” he said.

As for the words, “the idea of being bold should resonate with anyone who has gone through something difficult in their life and overcome it,” Sobol said. “Being bold is about aspiring to something, reaching for it.

“We already share a name with the community,” he added, “so we think this phrase really does it all.”

“This mural installation marks the beginning of a new era of public arts in Elmhurst, and it’s fitting that the University and City are working side by side to make it happen,” said Betsy Goltermann, chair of the Commission. “The Public Arts Commission is thrilled to have been part of the process, and looks forward to supporting more installations throughout the City.”

Weather permitting, Blanco and Sobol plan to finish the mural by the end of the month.