December 13, 2019 | by the Office of Marketing and Communications 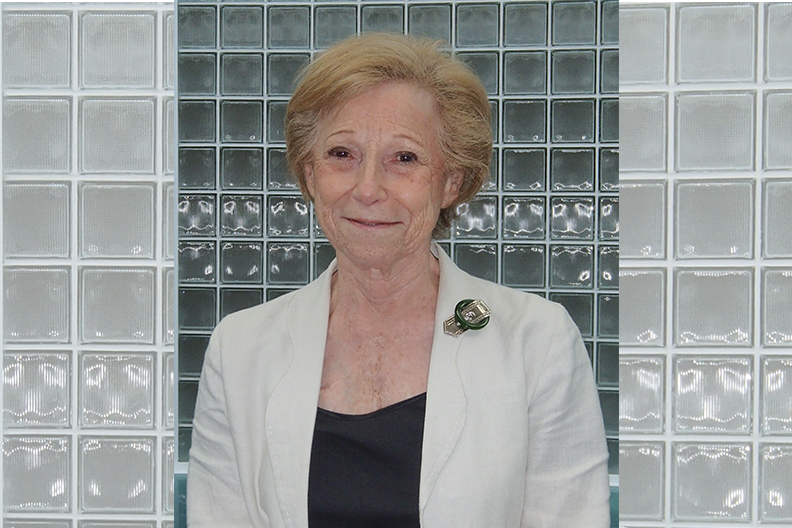 For more than 25 years, Adele Laznowski Zaveduk has shared her story about being one of the “hidden children” of the Holocaust, living with a Christian family when her parents were sent to Auschwitz.

Telling her story to schoolchildren, in particular, has been her life’s mission.

Suffering from advanced heart failure, Zaveduk, 82, began hospice care in her Northbrook home in early November, and was given a life expectancy of about six weeks. During a visit from a hospice chaplain, Zaveduk shared a boxful of children’s thank you letters she had received over the years. She also revealed her life’s deepest regret—that she’d never had the chance to complete her education by finishing high school and going to college.

When asked whether anything could be done to help her find some peace with that regret, she said, “Recognition of how I educated children would give my life purpose and would be a way to show my grandchildren the importance of getting an education.”

The chaplain, Nicolle See Grasse, immediately turned for help to her alma mater, Elmhurst College; and to the Illinois Holocaust Museum and Education Center, where Zaveduk was a member of the speakers bureau. 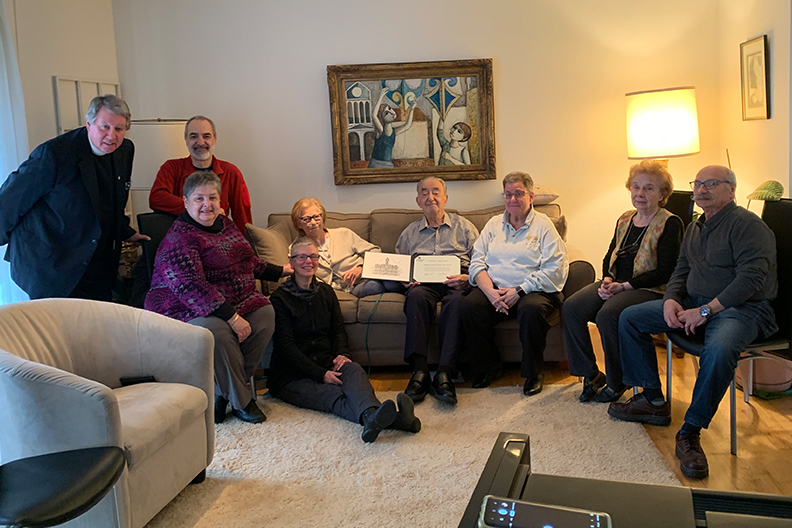 Recognizing Zaveduk’s significant contributions and the urgency of the request, Elmhurst College President Troy D. VanAken agreed to the creation of an award to honor her. During a small gathering on Nov. 22 attended by Zaveduk’s family and representatives from the College and the Holocaust Museum, Zaveduk was presented with a certificate of appreciation for educating generations of young people about the horrors of the Holocaust.

“She committed her life’s purpose to this endeavor so that others might remember, and never allow it to happen again,” the certificate reads. “We honor her life of service, her role as an educator, and her witness to life and human rights.”

Ben Zaveduk, who has been married to Adele for 63 years, said she was “elated to receive the award, especially for the next generation. I’m very grateful to everyone who made this possible for her.”

“Elmhurst College is so aware of what is the right thing to do, and of how much it meant to this person who had such a deep personal need as she was facing the end of her life,” Grasse said. “The fact that my college came through means the world to me.”

Elmhurst College Chaplain H. Scott Matheney presented the certificate to Adele Zaveduk. “To stand in that room and look in the face of that amazing woman, knowing her history and what she’s done—for the College to be able to recognize that was an amazing honor,” he said.

Born in a small town in France in 1937, Adele Laznowski was only 5 when both of her parents were sent to the Auschwitz concentration 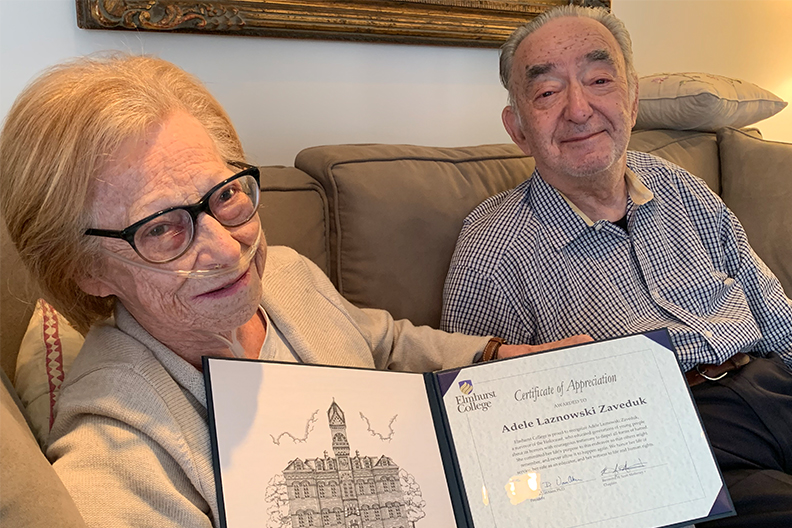 camp. Before being taken away, Adele’s mother paid a Catholic family to care for Adele and her younger sister. Remarkably, both of Adele’s parents survived and the family was eventually reunited, though Adele and her sister did not initially recognize their parents or understand that they were Jewish, having been raised Catholic with the other children. Soon after, Adele’s father died. Her mother remarried and the family moved to Argentina, where Adele was needed to work in the family store and was not allowed to attend school. After marrying Ben Zaveduk and starting a family, the Zaveduks and moved to the Chicago area in the early 1960s.

Amanda Friedeman, associate director of education at the Illinois Holocaust Museum, has been friends with Adele Zaveduk for more than a decade.

“She has had an incredible life—she has seen so much and given so much, including to the thousands of people who have learned from her,” Friedeman said. “That she still placed such a priority on education really speaks to her character and her values.

“It wasn’t until later in her life when Adele came to realize how important her story was to share,” she said. “That’s when she took on this task, to make sure she played her part to educate and make sure these stories were known and remembered.”