April 10, 2014 | by the Office of Marketing and Communications 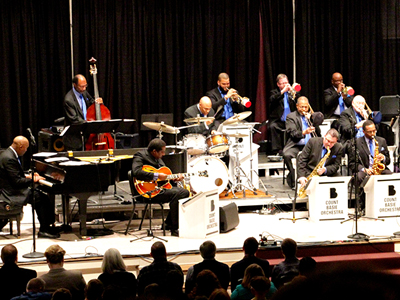 Anyone who thinks jazz is a dying art form should have stopped by Hammerschmidt Memorial Chapel at Elmhurst College during the last weekend in February.

Over three jam-packed days, no less than 40 bands and jazz combos thrilled crowds with riffs and vocals, with precision horn blasts, with the wail of saxophones and the crash of drums. A trio of renowned professionals judged every performance and shared critiques. There were clinics and deejay emcees. The legendary Count Basie Orchestra played to a sold-out Friday night audience. In its 47th year, the Elmhurst College Jazz Festival proved yet again that jazz is alive and well and thriving.

“We love being here. This is one of the best jazz festivals in the nation,” said Michael Goldsmith, jazz band director for Mineral Area College. “It’s a great time to bond and hear high-quality music.”

Goldsmith was catching his breath downstairs in the classroom catacombs of Hammerschmidt. Swarms of players rushed in and out of the makeshift staging area, unpacking instruments or gulping water or checking a tie in the mirror. The logistics of running this festival are as challenging as mastering Duke Ellington’s “Sound of Love,” which the Mineral musicians have just played upstairs in the chapel. Mineral is a two-year community college south of St. Louis, Goldsmith told me, and it’s big on jazz. This was the school’s fifth consecutive year at the festival. The kids love it, and he’s thrilled to participate. What sets this festival apart, he said, is the opportunity to learn—the “educational aspect.”

The festival had a very different feel when it started, back in the late 1960s. Then it played host to the Midwest regional competition, whose winners went on to the American College Jazz Festival at the Kennedy Center in Washington, D.C. When that festival lost its sponsors and closed up shop in 1973, Jim Cunningham, Elmhurst’s dean of students at the time and a longtime jazz lover, turned a regional stop into one of the country’s preeminent meccas for college jazz musicians. And he did it with a major shift in focus. There would be no contests, no competition. Jazz greats would remain a performance staple—Cunningham brought in the likes of Dizzy Gillespie and Miles Davis and Cannonball Adderly—and college bands, the festival main attraction, would continue to come here to perform. But the college bands would also come to learn. The judges would not be ranking each band and soloist; instead, they’d be taking notes.

Had the Mineral jazz musicians squinted through the stage lights and peered up, they would have spotted three small haloes of light in the first row of the balcony. There, hunched in the dark over paper and pads, were three men furiously scratching tips and advice, which would be handed to band directors at the festival’s end. Small wonder that Goldsmith exclaimed, “We’re excited to go home and practice!”

The three judges on the balcony were top musicians in the jazz world: baritone saxophonist Gary Smulyan, trombonist Andy Martin and trumpeter Bobby Shew. The most voluble is Shew, a burly, high-spirited musician with a long career as a recording artist and teacher. On Saturday morning, with his cohorts perched on stools alongside, he gave a free master clinic on what jazz is all about to an eager audience in Hammerschmidt.

“Here are the two most important things,” said Shew in his growl of a voice. “One, listen to the great players play. Everything starts with observation. Two, get on the bandstand and play. Don’t worry about missing a note. Jazz is all about being creative, improvising in the moment. That’s the challenge—to imagine a problem and go out and solve it. It takes a lot of courage to pick up a horn and not know what you’re going to play. Miles always said, ‘If you know what you’re going to play, don’t play it.’”

Shew is a hugely entertaining, nonstop talker. He’s big on the creative process, big on rogue talent. You can give an artist a color wheel, an easel and oils, but you can’t tell him what to paint. You have to find your own voice. People thought Picasso was crazy when he put two eyes on one side of the face and a nose on the other. But you have to trust your instincts. Jazz is all about individual points of view. Get rid of the rules. Remember what Mark Twain said: “Never let school interfere with your education.”

Much laughter as Smulyan took over the microphone. His advice: Use your ears and find a hero. There’s a strong imitative phase to jazz, especially at the start. When someone grabs you, go out and buy all their records. Smulyan devoured Clifford Brown, buying everything Brown ever recorded. You’re into jazz trumpet? Google it. Use the computer as a tool.

Shew claimed the stage again. He needed to remind everyone that it’s the bass—yes, the bass—that anchors a band. To appreciate this, he wanted everyone in the audience to hear what a bass line sounds like; he leaned close to the mike and bleated out a phrase that sounded remarkably like a musical instrument. He repeated the phrase, asked the audience to sound it out with him, then told everyone to shut their eyes. Don’t make a sound. Listen to your heart. Listen to what’s inside you.

“Do you ever have doubts?” asked a man in the audience.

“You mean every day?” said Smulyan, to much laughter.

I caught up with Smulyan later in the day during one of his rare breaks. A recognized master of his instrument, Smulyan has recorded and performed worldwide with musical giants including Stan Getz, Ray Charles, B.B. King and Diana Ross. He judges three or four college festivals a year, but Elmhurst is special.

“It’s the energy of the students, their passion,” he said. “People come here to share their music. It’s not a competition. There are no grades. Other festivals have a ranking system, but I give Elmhurst a lot of credit for doing away with that. These are young musicians who can be nervous or anxious. Positive feedback is a much better approach. It’s the non-competitive environment that Doug sets up for the students.”

“Doug” is Doug Beach, the festival’s coordinator and director of jazz studies at Elmhurst. Managing a festival like Elmhurst’s is no small undertaking. Beach, who’s been running the festival for the past eight years, used to have colleges send in audition tapes, but his office was overwhelmed. Now it’s first-come, first-served. Registration starts October first; by mid-month all the places are filled. The schools pay Elmhurst a fee and cover their own travel expenses; Elmhurst’s biggest expense is payment to headline bands like the Count Basie Orchestra. Otherwise it’s all volunteer staff, more than 100 students under two “Student Managers,” who run the box office, steer traffic, serve as security and work as stage crews. Eight hours a day they’ve got their hands full ensuring that each college band has what it needs and gets onstage in time. Weekend nights there’s the added pressure of handling sold-out audiences who’ve come for the festival’s big performance draws. On Friday it was the 12-piece Count Basie Orchestra that rocked the rafters; Saturday, 20 top musicians from New York under Ryan Truesdell brought the magic of Gil Evans to Hammerschmidt.

Beyond the big-name bands, beyond the thrill of hearing pros like Smulyan, Shaw and Martin, there are other treats. Smulyan in particular enjoys the “community” bands. “They’re open to anyone from 18 to 78. It’s multi-generational, all different levels. It’s the opportunity to come together and play music just for the sake of playing music. And to me,” says Smulyan, “that’s a beautiful thing.”

Even younger musicians showed up on Thursday when, for the third year, a select group of local high schools made the trip to Elmhurst for a special session with Shew, Smulyan and Martin. Each band took a 15-minute turn on stage, playing for the pros, then everyone put down their instruments for reaction and tips.

“Your energy, that’s huge,” Shew told the players from Downers Grove North High School. “But don’t sacrifice the quality of the sound for volume. Listen and control your sound. Don’t let your playing get away from you. Let’s play that part again but softer, as soft as you can.”

The band members picked up their instruments and repeated a section.

“Great, to me that’s already better,” said Shew. “Now you can hear the notes, the voices. Oh, one other thing. I didn’t see anyone smiling. You’re supposed to be enjoying yourselves. That’s half the battle.”

As he would do later, in the Saturday clinic, Shew extemporized on the creative impulse in jazz. It’s a feeling—not like a polka or march. Trust yourself. Challenge yourself. Internalize the feeling; improvisation is the chance to go inside yourself. Learn to listen. Learn from the greats. Buy their recordings. If you want to learn to ride a horse, you go to the rodeo. But don’t just play what’s on paper. Go inside your head. Stick your neck out. No one’s going to throw you in jail for missing a note. “So drop your trousers and go for it! Put some jungle in there!”

Later, I caught up with Brayer Teague, the director of the Downers Grove band.

“It’s exciting to be invited, it’s incredible that the kids get to hang out in the company of these jazz legends. In fact we’re working on a piece from If the Shew Fits [Shew’s cd]. It’s a thrill to be in the same room with him. It’s an incredible learning opportunity.”

That opportunity extends to Doug Beach, too. The Elmhurst College Jazz Band was the last college band to play on Friday afternoon, and the three judges were all at their balcony posts. I’d imagined a few scrawled notes, but what Beach received were three oversized “comment sheets,” filled top to bottom with reaction and insight. Much is positive (“Love this chart!” “Great solo—what an amazing talent!”) but there are plenty of tips and detailed advice. “Brass, be more careful with intonation on intro,” wrote Martin. “If I were playing the melody, I would stay truer to actual melody notes instead of showing my knowledge of harmony. Wait for the blowing to do that!” And this from Smulyan: “Need to check out what’s going on with your horn—it’s really sharp from high C up.” From Shew: “Adam does a wonderful job on lead trumpet—precision, BABY!”

Despite all the encouraging words and praise from the judges, it’s fair to wonder where these talented musicians go after college. The days of touring combos are pretty much over; you don’t do apprenticeships on the road. It’s not like the Grammys are packed with jazz.

“A lot of them are going to become teachers, and that’s not such a bad thing,” said Neil Tesser, a longtime jazz critic and himself a recent Grammy winner for liner notes. “Even if they don’t play professionally or teach, these [college musicians] have learned invaluable stuff from jazz. Spontaneity, improvisation, thinking outside the box—those are terrific skills for almost any profession. For a lawyer who’s in court and has to think on his feet, there’s no better preparation than mastering the art of riffs from jazz.”

Beach, for one, couldn’t agree more. The days of smoke-filled basement clubs may be over, but the music is still going strong. “In fact, it’s gained some traction,” he said. “Going on the road no longer provides an apprenticeship, but jazz education has taken its place. That’s what makes a college festival like Elmhurst so popular, and not just for the musicians. People love to come and see young players.”