May 20, 2021 | by the Office of Marketing and Communications 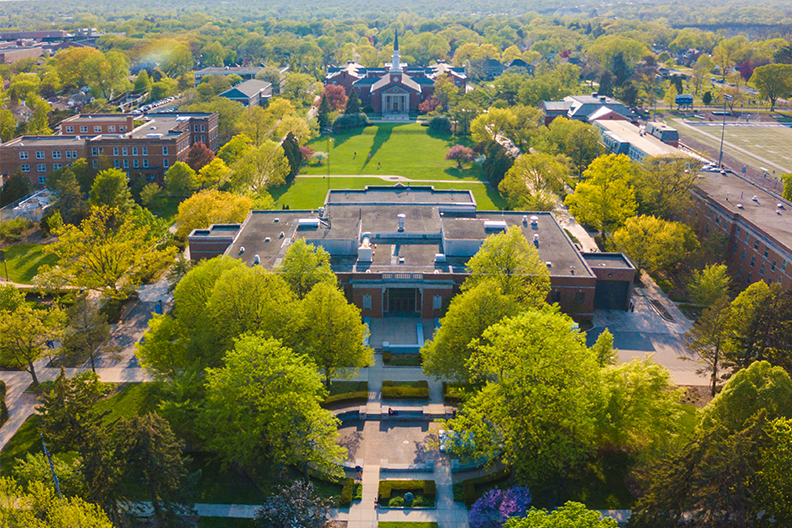 The Elmhurst University 2021 Student Leadership Awards celebrated the many ways students and others in the University community made a distinctive, positive impact on the campus in the past academic year.

During the ceremony, four seniors received the Founders and Senior of the Year awards, considered among the University’s top honors for individual student achievement.

“Many of you have gone above and beyond to support, promote and embody the excellence of Elmhurst University,” said Phillip Riordan, vice president for student affairs. “All of you have made a profound impact on our community.”

The ceremony also recognized the winners of the Founders Awards and Senior of the Year for their service and leadership.

Laura Rusk, a political science and philosophy major from Evansville, Ind., received the Founders Award for Service to the University Community. A midyear graduate, Rusk served in a number of student organizations, including SGA and Relay for Life. Her work on the restorative justice committee of her sorority, Phi Mu, enabled her to effect change at a national level. She says her service to Phi Mu “gave me a greater sense of purpose and has shown me that change truly starts with me.” Rusk also interned on Capitol Hill and worked for a non-profit focused on making athletics more open and inclusive. She plans to become a lawyer and “show the world that all people are worth fighting for and that justice is something within our control.”

Ana Romo, a senior from Chicago who is double majoring in communication sciences and disorders and Spanish, received the Founders Award for Service to the Greater Society. After serving on the boards of the Latino Student Association and Alpha Mu Gamma, Romo plans to apply the leadership skills she gained to “continue to proudly represent Latinos while educating others and involving individuals of diverse backgrounds to become more open-minded and welcoming to one another.” As a facilitator and tutor for the York Literacy Project, she learned the importance of being a role model. “After volunteering locally and globally, it is clear that we are all one and at the end of the day, we can see ourselves in one another if we look through a humane, empathetic lens.”

Afaaf Amatullah, a senior from Bloomingdale, Ill., who is majoring in English and philosophy, received the Cureton Award for Service to the Global Community. As an Elmhurst student, she continued to live out her long-held belief that educators can transform a community. She was a Bluejay First mentor to first-generation college students, and said the experience “caused me to examine what my religious/ethnic identity contributes to a diverse setting.” She also taught English to instructors of underserved schoolchildren in Pakistan, and recently was named a semi-finalist in the Fulbright U.S. Student Scholar Program with hopes of teaching in Turkey. “Utilizing my experiences in college, I resolve to use my voice, whether verbally or in written form, for the larger purpose of advocacy,” she said.

The 2021 Senior of the Year is Amanda O’Brien, an Early Childhood Education and French major from Lombard, Ill. Through active involvement in Greek organizations and other student activities, O’Brien learned to lead in new ways while fueling her passion to help others. She served as chapter president of Kappa Delta Pi and is a member of the National KDP advisory board, Alpha Mu Gamma and Phi Kappa Phi. She also held roles in Habitat for Humanity and Relay for Life, where she served as mission chair and secretary. With encouragement from her professor, O’Brien had the opportunity to pursue one of her other passions, French. She plans to teach in France for a year after graduation, and acknowledges her supportive community in making her dreams a reality.